Chicago Cardinal Francis George, who last week compared the Gay Pride parade to a march by the KKK, defended his remarks on the Church's website yesterday: 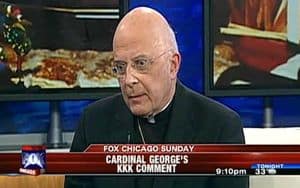 The Chicago Gay Pride Parade has been organized and attended for many years without interfering with the worship of God in a Catholic church. When the 2012 Parade organizers announced a time and route change this year, it was apparent that the Parade would interfere with divine worship in a Catholic parish on the new route. When the pastor's request for reconsideration of the plans was ignored, the organizers invited an obvious comparison to other groups who have historically attempted to stifle the religious freedom of the Catholic Church. One such organization is the Ku Klux Klan which, well into the 1940's, paraded through American cities not only to interfere with Catholic worship but also to demonstrate that Catholics stand outside of the American consensus. It is not a precedent anyone should want to emulate.

It is terribly wrong and sinful that gays and lesbians have been harassed and subjected to psychological and even physical harm. These tragedies can be addressed, however, without disturbing the organized and orderly public worship of God in a country that claims to be free. I am grateful that all parties concerned resolved this problem by moving the Parade's start time so as not to conflict with the celebration of Mass that Sunday.

The Catholic leader has so far resisted calls for his resignation.

Writes journalist Rex Wockner, in a note received by Towleroad:

"The Chicago gay pride parade attracts 800,000 people. It proceeds through a heavily congested, dense urban cityscape. Absolutely positively everything in its wake is disrupted. What on earth makes one service at one church on one day special enough to change the start time of a gigantic parade? Let alone excuses comparing 'the gay liberation movement' with the 'Ku Klux Klan'? No, cardinal, the gay pride committee is not targeting the Catholic church. 'The gay liberation movement' is not targeting the Catholic church either. Your church building is affected in no way any different from hundreds upon hundreds of buildings for miles in all directions (Lake Michigan notwithstanding). You really do need to get out more."