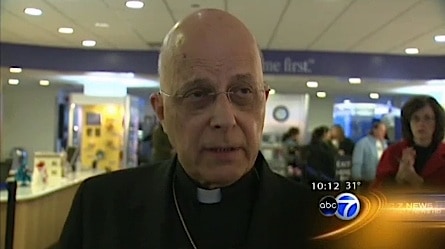 "You don't want the gay liberation movement to morph into something like the Ku Klux Klan, demonstrating in the streets against Catholicism."

The remarks drew outrage from activist groups and local media.

Equality Illinois CEO Bernard Cherkasov told ChicagoPride.com: "To compare LGBT equality movement to the KKK is beyond irresponsible. The Cardinal not only mocks LGBT people who are struggling for equal protection under the law, but he also trivializes the real suffering experienced by KKK's victims – African Americans, Jews, and others – in the darkest days of our country's history."

Windy City Times editor and publisher Tracy Baim called on the Cardinal to step down.

On Wednesday, organizers with Chicago's annual gay pride parade agreed to a later start time after Our Lady of Mt. Carmel Church leaders objected to a newly-proposed route they claimed would block access to Sunday Masses. Leaders said the new route would draw massive crowds and block the church's entrance.

On Thursday, Equally Blessed, a coalition of four Catholic groups that work for LGBT rights, called his comments “crude” and “demagogic."

“Cardinal George’s offensive comments are further evidence of just how insensitive and out of touch the hierarchy is, and why opposition to its views is necessary,” the group said in a statement.

Yesterday, George attempted to soften his remarks while out and about on his Christmas day duties:

"Obviously, it's absurd to say the gay and lesbian community are the Ku Klux Klan, but if you organize a parade that looks like parades that we've had in our past because it stops us from worshipping God, well then that's the comparison, but it's not with people and people – it's parade-parade," said George.

Watch ABC7's interview with George about the remarks, AFTER THE JUMP…