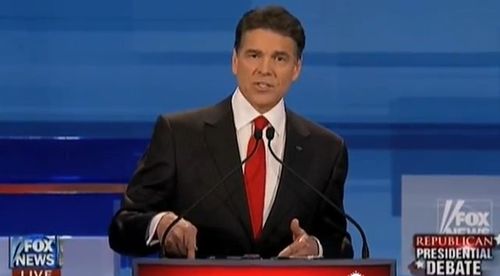 In the grim slog of Repubican primary campaigning, no candidate has so relentlessly pursued the lowest-common-denominator vote as Texas Gov. Rick Perry. In recent weeks he's shown as little regard for his dignity as for his syntax, leaping from one potential reservoir of populist anger to another, aping the inchoate rage he imagines burning in the hearts of Iowa's least-lettered caucusgoers. It hasn't worked. Iowa's caucusgoers are smarter than he thinks they are, and Perry's polling in the single digits.

Perry's cynical anti-LGBT posturing — which reached its nadir in his "Strong" ad, and was revealed as a sham when he admitted he didn't know what Lawrence v. Texas was all about — has now given way to anti-Congress posturing. For at least two debates now, Gov. Perry's been insisting that a President Perry will make half of the legislative branch of the American government work half-time for half-pay.

I'm posting Perry's new ad to that effect because, with the candidate-winnowing Iowa caucus just three days away, it may be the last we'll ever see from the man, and his imminent departure from the race seems worth commemorating. Note how, in the ad, the excerpted bit from December 15th's FOX News debate features an audience roaring its approval of Perry's anti-Congress spiel. I'm pretty sure there was no such roar on the night, but I can't seem to find a clip. If anybody knows where one is, I'll post it.

Watch Perry's ad, AFTER THE JUMP …