You may recall that back in July, John Becker, from Truth Wins Out, a group that works to expose the "ex-gay" movement, paid an undercover visit to Marcus Bachmann for a set of "pray away the gay" therapy sessions which he then wrote up to apply pressure to the Bachmanns for accepting public funds for this discredited and damaging practice. 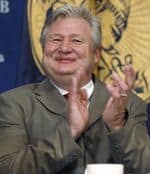 You may also recall that in November, Bachmann began demanding payment for the sessions that Becker didn't use.

Bachmann has decided to let it all drop, which disappoints Truth Win Out's Wayne Besen:

“The last thing we expected was for Marcus Bachmann to behave rationally and abandon his specious and spiteful claim that we owed him money. It is a shame that he wasn’t foolish enough to allow a $150 billing dispute to turn into free publicity that highlighted the harm caused by ‘ex-gay’ programs.”