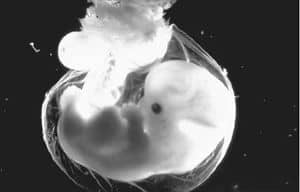 Weird but true: The Oklahoma legislature is considering a bill to outlaw cannibalism. Not because cannibalism has been a problem in OK. It hasn't. Check out the text of Sen. Ralph Shortey's Senate Bill 1418:

An Act relating to food; prohibiting the manufacture or sale of food or products which use aborted human fetuses; providing for codification; and providing an effective date.

BE IT ENACTED BY THE PEOPLE OF THE STATE OF OKLAHOMA:

SECTION 1. NEW LAW A new section of law to be codified in the Oklahoma Statutes as Section 1-1150 of Title 63, unless there is created a duplication in numbering, reads as follows:

Reading that, my first thought was: Medicine! For there couldn't possibly be any foods in OK supermarkets that contain aborted human fetuses, or that were created by R&D requiring the study thereof. Which must mean Sen. Shortey's real concern must be for the "manufacture" and "known selling" of "other products intended for human consumption." And that must mean medicine derived from embryonic stem cell research. Sen. Shortey, I thought, wants to preemptively deny his state the next decade's most advaned medical care.

But then I visited KOKHFox.com and saw their report on the legislation, and discovered that Sen. Shortey really is worried about fetuses in his food. (And, it seems, medicine. But mostly he's grossed out about the food thing.) Watch KOKHFox's report here.