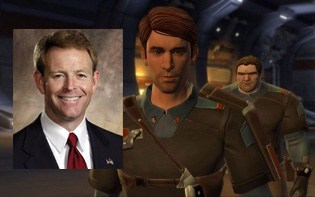 "In a new Star Wars game, the biggest threat to the empire may be homosexual activists! Hello, I'm Tony Perkins of the Family Research Council in Washington, D.C. In a galaxy not so far far away, Star Wars gamers have already gone to the dark side. The new video game, Star Wars: The Old Republic, has added a special feature: gay relationships. Bioware, the company that developed the game, said it's launching a same-sex romance component to satisfy some complaints. That surprised a lot of gamers, since Bioware had made it clear in 2009 that "gay" and "lesbian" don't exist in the Star Wars universe."

RWW has the audio.

Previous Post: « A Day at the Dog Park, from a Dog’s Perspective: VIDEO
Next Post: Where Michael Fassbender’s End Got Its Start: VIDEO »