Cody Renegar and his fiance Thomas Staed plan to hold a commitment ceremony at their Elkins, Arkansas home this summer and hoped to publish an announcement in the Arkansas Democrat Gazette. 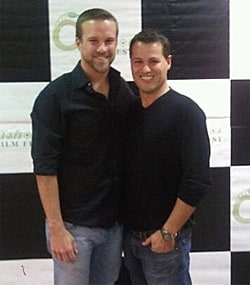 But the paper won't let them, KNWA reports:

The paper's publisher says it is their policy to only print announcements for marriages legally recognized by the state, and Arkansas does not acknowledge same-sex marriages.

"It's not a law for it not to be put in the paper, it's a choice of theirs, it felt to me like they were making a stance.  Whether they were or not I don't know," Renegar says.

He says the paper's position is a big letdown. "You want to be recognized as a taxpayer, as a human being, as a person in love…it's not that complicated for them to print a picture of people in love."

We did ask the paper's publisher for an on-camera interview, but he declined our offer.

Watch a video interview with Renegar at KNWA.

Gazette publisher Rusty Turner told Yahoo! News on Monday that he was not familiar with Renegar's request, but said it would not be published because of long-standing editorial policies. "We run announcements for marriages that are legally recognized in Arkansas," Turner said."It is a long-established policy of the newspaper."

Turner said he was personally unaware of any similar requests from same-sex couples.

A petition to the paper has been launched at Change.org.