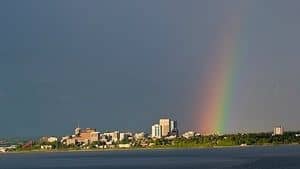 … and it's not just in Virginia. In Alaska, too, securing legal protections for gayfolk may prevent the free exercise of religion. From The Anchorage Daily News:

… The initiative up for public vote would extend legal protections against discrimination to gay, lesbian, bisexual and transgender people in Anchorage. Current law already prohibits discrimination in employment, loans, rentals, real estate deals and other activities on the basis of race, color, marital status, sex, religion, disabilities and the like. The initiative would add sexual orientation and transgender identity to the list.

… The main problem as the Alliance Defense Fund sees it is that private business owners could be forced to hire or do business with people whose sexual orientation doesn't match their religious beliefs, said Holly Carmichael, a lawyer for the fund.

"The ultimate concern with enacting something like that is that it infringes on religious freedoms," Carmichael said. "There's a huge constitutional concern here.

… Carmichael … agree[s] that religious organizations are protected by an exemption already in city law that says religious institutions and groups can give preferential treatment to people of the same religion if they are, for example, hiring someone who will promote religious principles.

But that's not enough, apparently. Note how, in the above excerpt, the Daily News makes mention of pre-extant legislation prohibiting employment discrimination based on religion, which means that even now Anchorage Baptists must, in theory, be open to hiring voodoun secretaries. They do not seem to have suffered from the imposition.