If you are gay, in a long-term relationship, and employed, there is a chance you have the option of extending certain employee benefits to your partner. When the state (meaning, any part of government) is your employer, i.e., school districts, court systems, and departments of water and power, to name just a few, you have certain rights and entitlements that the private sector need not always match. Therefore, when a state actor refuses to grant benefits to same-sex partners of employees, we challenge the discrimination as violative of the due process clause and the equal protection clause (among other possibilities). 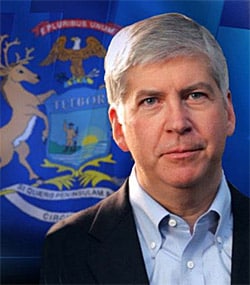 That is why the American Civil Liberties Union, alongside the law firm Kirkland & Ellis LLP, is suing the governor of Michigan on behalf of four gay public employees because Governor Snyder (pictured) wants to take away the benefits that certain Michigan towns and counties are already extending to these employees' partners. The complaint is available here.

But, I would like to argue that this case — and all fights about the extension of benefits — are not really about benefits. Nor is the fight for marriage. It is counterproductive to couch our fight for equality in terms of things, stuff, and other accoutrements of state largesse. More specifically, this case, captioned Bassett v. Snyder in the Eastern District of Michigan, teaches us two important legal lessons:

1. Despite Romer v. Evans and Lawrence v. Texas, states are still trying to single out gay people for discrimination. This means that success in cases like Perry v. Brown are more important than ever and mooting Perry because of a knee-jerk reaction to put Prop 8 on the ballot has wide-ranging negative implications.

2. Marriage law is not just about marriage. For those who believe the gay community is focusing too much time, money, and effort on winning marriage rights, this case illustrates the importance of marriage law and the far-reaching implications of our inclusion in the institution of civil marriage.

For a discussion of these points, a summary of the Bassett complaint, and its implications, continue AFTER THE JUMP…

Before 2004, many arms of the state chose to extend benefits to same-sex domestic partners of employees, coming up with their own criteria for what constitutes a "domestic partner." Then, in 2004 and 2005, Michigan amended its Constitution to include a "one-man-one-woman" definition of marriage and the state attorney general interpreted the new provision to ban benefit extension policies when they hinged on an employee's participation in a partnership institution that qualifies because of its similarity to marriage. Something like a marriage between two individuals of the same sex could never qualify you for marriage-like benefits, the argument went, because any union between individuals of the same sex is nothing like a marriage (at least in Michigan).

Undeterred, various municipalities and counties changed their rules to allow benefits extensions not when someone was in a marriage-like union, but rather to some "qualified adult," the definition of which was up to each public employer. This allowed the entities to extend benefits to individuals regardless of sexual orientation or relationship or kind of union. Governor Snyder and the state's Republican majority, animated by a Tea Party obsession with cutting government spending, felt that these "other qualified adult" provisions were attempts to skirt opposite-sex marriage law in Michigan and a financial burden on the state.

The problem with this law is not that a state should not be able to say which kinds of people should be able to get family health benefits, but that the Restriction Act is specifically aimed at banning gay people from the practice. The plain language of the law excludes gay people, but not other family relationships. The debate in the legislature was replete with comments that the Restriction Act was aimed at gay people. And, even the name of the law — the Public Employee Domestic Partner Benefit Restriction Act — refers to an institution that gay Michiganders use to sanctify their unions.

Therefore, the Restriction Act violates both the Substantive Due Process Clause and the Equal Protection Clause.

Substantive Due Process. Substantive due process rights refer to rights that are so fundamental to our system of government that without them, we would not be living in a free society. The clause gives us a constitutional hook for the right to privacy, the principles of fairness and justice in voting, as well as any other right reserved to the people that makes us who we are. Any law that attempts to take away such essential rights violates the substantive due process clause.

So, what right is being violated? Governor Snyder would argue that there is no substantive due process right involved in this case because the Restriction Act only refers to health benefits, and there is no right to extending health benefits to the partners of state employees.

That view suffers from the same myopia as the odious Bowers v. Hardwick, which assumed that a challenge to an anti-sodomy law was about a fundamental due process right to engage in gay sex. No. Like the issue in Bowers was broader — the liberty to define and express your intimate relationships — the issue in Barrett is broader than just access to benefits: the right to be free of government burdens on those intimate relationships.

Equal Protection Clause. Equal protection under the laws demands that the state treat all similarly situation individuals the same, unless there is a good reason for not doing so. Depending on the state's basis for treating people differently, the state must have a "legitimate," "important," or "compelling" justification for its discrimination. This is part of the difference between rational basis review, heightened scrutiny, and strict scrutiny, and as the wording implies, there are lots of "legitimate" justifications and very few "compelling" ones. The ACLU argues that there is no legitimate state interest, let alone an important or compelling one, in treating gay employees different than straight employees, especially since the financial burden on the state is negligible. If the court adopts President Obama's view that discrimination on the basis of sexual orientation merits heightened scrutiny, it will be even harder for Governor Snyder to justify his discrimination of his gay employees.

The fact is that this sorry case of discrimination exists because our laws not only recognize the state's power to exclude us from the institution of marriage, but also permit bans on same-sex marriage to justify discrimination on all the rights and entitlements associated with marriage or marriage-like unions. Notably, the extensive reach of one-man-one-woman marriage laws beyond marriage law cannot be solved by going to the ballot or to legislatures and passing gay marriage laws state by state. That is because even if Washington State or New Jersey pass marriage equality laws, those advances say nothing about Michigan's power to discriminate on the basis of sexual orientation or even Washington's and New Jersey's power to do the same. We need federal precedent that makes it law that the state has no legitimate or important or compelling justification for discrimination on the basis of sexual orientation when it comes to the institution of marriage. And, the only way to do that today is to support the Perry v. Brown litigation and not cut it off at the knees by going back to the ballot in California.

This case also makes clear that our fight for marriage is not just about marriage and does not only apply to those of us who want to get married. Success in Perry would mean the end to the discrimination at issue in Barrett, which is discrimination that can affect any gay person, including those who do not care to marry. Marriage means more than benefits, favorable tax treatment, and even love — it is the key to equality in general.