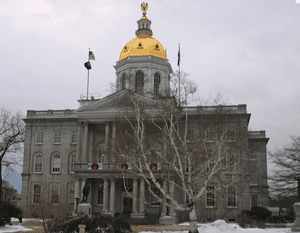 The Concord Monitor has a detailed story out today about the various forces arrayed for and against the repeal of marriage equality in New Hampshire. Interestingly, the decisive votes are likely to arise from within the state's Republican party. Despite a veto-proof majority in both houses of the state legislature, and despite an official party-line definition of marriage that exludes same-sex unions, Republicans are worried — indeed, seem almost certain — that the repeal's a no-go. From the Monitor:

"It is certainly disappointing to me," Sen. Fenton Groen, a Rochester Republican who has been vocal in his support of the repeal, said last week. "I think that, in the House particularly, we have a significant libertarian caucus within the Republican Party. . . . And there are some Republicans who differ on that within that caucus."

In order to repeal marriage equality in New Hampshire, anti-marriage Republicans would have to bring to bear 2/3 majorities against a veto by Democrat governor John Lynch, and it looks very much like libertarian Republicans may keep that from happening:

"I'm for liberty and freedom, leaving people alone so long as they don't harm or defraud other people," said Rep. Steve Winter, a Newbury Republican who opposes the repeal.

Winter, a 73-year-old retired airline captain, was Senate clerk under Republican former Senate president Tom Eaton from 2002 to 2006. He considers himself a "fiscal conservative and a social libertarian."

"I believe what people do with their lives, how they select their mates, is none of my business and none of the state's business," Winter said.

Rep. Seth Cohn, a Canterbury Republican who moved here as part of the Free State project, a libertarian movement to relocate to New Hampshire, is also against repeal. Cohn and others believe the bill may pass the House but does not have the two-thirds majority to override a potential veto by Democratic Gov. John Lynch, who signed the bill three years ago legalizing same-sex marriage.

There are some pro-repeal voices among the libertarians, too. The head of New Hampshire's Republican Liberty Caucus, Carolyn McKinney, worries that failure to repeal could result in the curtailment of religious liberties, and (in a uniquely New Hampshire/libertarian twist) that the erosion of traditional families might lead to dependence on government and the consequent expansion of the state. Other libertarians voice similar concerns, but probably not enough. From the Monitor:

"I know for a fact, based on people I've talked to, that if Gov. Lynch vetoes it, that veto is not override-able," Cohn said.