One of the conservative cases against employment anti-discrimination laws usually, but not exclusively, rests on an analysis of free markets and goes something like this: Laws that ban workplace discrimination are unnecessary because any company that discriminates for irrational reasons (on the basis of gender, race, religion, and so on) are not hiring the best and brightest. By not hiring the best employees, these companies will suffer when competing against firms that do not discriminate and hire the best workers regardless of personal characteristics that have nothing to do with their productivity. When the discriminatory firm is faced with revenue loss or loss of market share or business failure, it will drop its discriminatory hiring practices in order to survive. Therefore, anti-discrimination laws unnecessarily impose government regulation where the free market should function efficiently, weeding out discriminators for economic ruin. 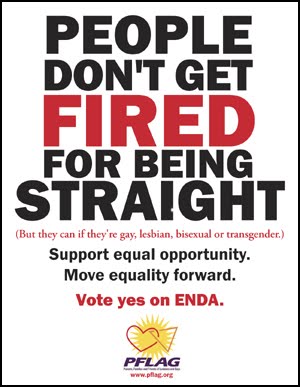 This argurment is neither fringe nor is it the only one out there, but it has been raised by various economic luminaries like Gary Becker and Kenneth Arrow and discussed by leaders of the law and economics field, including Richard Posner, Frank Easterbrook, and others. I have some sympathy for this view, and not only because the incomparably brilliant John Donohue at Stanford Law School has offered quite a bit of evidence in support. Theoretically, it makes some sense.

And, when we look at the argument for laws banning discrimination in employment on the basis of sexual orientation — a topic we discussed last week — perhaps the contrary evidence is out there. After all, the top five federal contractors already include sexual orientation in their non-discrimination policies, and vast swaths of the private sector, from law firms to American Express to Forbes Top 100 companies, do the same. They know that if they want to compete in a free market, they need to hire the best people regardless of sexual orientation.

I would like to argue that while the free market argument sounds reasonable, it suffers from at least three systemic flaws, which together remind us of the pressing need for a legal weapon in a legal, economic, and cultural fight.

Neo-classical economics has come under fire from the behavioral economics school for assuming that people always act rationally even though we know differently. To an economist, rational means that if you had the choice between something that gave you two points on the happiness scale and one point on the happiness scale, you will always choose the thing that makes you happier. Notably, more happiness, i.e., utility, does not always have to mean more stuff. If you had the choice between two pieces of cheesecake and one piece of cheesecake, you might choose to only have one piece because you are more concerned about fat, calories, and cholesterol than any immediate gratification you might get from the awesomeness that is cheesecake.

Even assuming that a given discriminatory hiring practice causes a proportional drop in productivity and, therefore, revenue, for the free market argument to work, we need a rational business owner to prefer revenue to discrimination. This has two problems, which cause even more problems!

First, the revenue drop must be sufficiently significant to cause an employer to change his behavior, and second, the loss of utility (or, happiness) caused by the loss of revenue must be higher than the utility the employer gains by discriminating.  I address the first below in point 2; the latter point once again assumes that an employer would act rationally when comparing utilities and ignores the special animus that one might hold toward a victimized group. That is, what if hate overpowers money? Let's say my business, Super Straight, Inc., wants to make more Very Straight Widgets, so I need to hire more people. Even though Les B. Ian can make one thousand VSWs per day, causing a 100 jump in my revenue, I would be 200 points angrier just knowing that Ms. Ian is around. A rational actor would still discriminate. But, even if the change in utilities were equal, or even reversed, a rational model assumes fungibility where some people might value their adherence to bigotry stronger than any increase in mere money.

Therefore, we can see that only certain rational actors would respond to the free market and employers that do not act rationally may never respond to it.

Second, the argument assumes that the quantity of potential gay employees can influence employer behavior.

Gay, lesbian, and bisexual employees are, on average, just as productive as their heterosexual counterparts. But, there are a lot fewer of them. This means that even assuming the veracity of the rational behavior model discussed above, discriminating against such a small minority may not have the kind of negative economic effects that would drive a discriminator to change his behavior or close up shop. In fact, in order to push a discriminator into economic ruin (or, even, a statistically significant loss of revenue or market share), the group victimized by discrimination must be large enough to have its best and brightest, a small subset, have enough of an impact. If you discriminate against women, you exclude 50 percent of your applicant pool; if you discriminate against African-Americans or Latinos, you exclude roughly 13 and 17 percent of your applicant pool, respectively. But, gays make up only about 1.7 percent of the US population. Discriminating against the 2 percent of Americans that are natural red heads is more likely to negatively impact your business than discriminating against gays.

The free market forces incentivizing nondiscrimination, therefore, do not exist with respect to small minority populations. So, even assuming the truth of the economic premise, the market fails when it comes to gays. That is the exact moment when the law should step in.

Third, the economic argument ignores the cultural and expressive power of the law. Arguing that many large, competitive companies already ban discrimination on the basis of sexual orientation is evidence that market forces are already working to end anti-gay hiring practices is a little like saying a beautiful flower is evidence of God. It is certainly possible, but there is no evidence of causation: the mere fact that American Express does not discriminate may be evidence of its economic response to an economic reality, but we know nothing more conclusive than that.

Most laws have an expressive angle. Some are simple: a law banning murder expresses society's view that your rights to do what you want end at someone else. Some are more subtle: a progressive tax regime shows that society is interested in equality and fairness.

Employment non-discrimination laws are not exclusively about ending the trappings of insidious bias in the workplace; they also enshrine a progressive society's commitment that members of minority groups are not second-class citizens. They help change the mind of society as a whole about the value and rights of those that are different. Sure, true reform may take a generation or more; but, non-discrimination laws create a background of fairness, equality, and respect in which we raise our future business owners, future workers, and future policy makers. This long run cultural impact may qualify as what economists call "social welfare," but it is absent from the free market theory in employment discrimination.