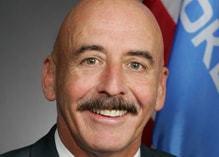 McAffrey became the first openly gay member of the Oklahoma state legislature when he was elected to the House of Representatives with the backing of the Victory Fund in 2006.  He was reelected in 2010 and stood for this special election to the Senate when District 46 Senator Andrew Rice announced his resignation in October of last year.

“Al’s election to the State Senate is another milestone for LGBT Oklahomans, and we are proud to support his campaign,” said Chuck Wolfe, president and CEO of the Gay & Lesbian Victory Fund.  ”There are still a number of states that have never elected any openly LGBT state legislators, so Oklahoma can be proud that Al has been elected to both the House and the Senate.”