The prescient dissent has a storied place in American constitutional history thanks to the preeminence of once-dissenting Supreme Court justices like Holmes, Harlan, and Brandeis. Their progressive dissents foresaw a future where the poor were treated with dignity; where equal protection included all races and religions regardless of status, wealth, or national origin; and where liberty meant more than a corporation’s freedom to run a sweat shop. Their views became majority opinions not only because social forces finally caught up with their genius, but also because they were right on the law from the start. 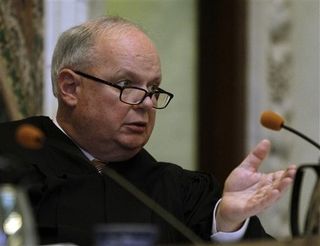 Neither can be said for Judge Smith’s dissent in the Ninth Circuit’s recent decision in Perry v. Brown. By tilting away from the arc of social progress and doing so on shaky legal ground, Judge Smith has earned his place in the dustbin of forgotten history.

But before we relegate Judge Smith to a tiny footnote, today I will argue that Judge Smith relied on outdated law and made a logical and legal error when he converted an already broadly permissive rational basis test, in which state action that discriminates has to be rationally related to some legitimate government interest, into a standard of good faith, where “rational” can mean honest reliance on anything.

First, a disclaimer: Many Towleroad readers and commentators elsewhere have noted that Judge Smith is a Mormon appointed by George W. Bush, suggesting that his political conservatism and his religious affiliation with a pro-Prop 8 group made his dissent a foregone conclusion. I will not join that speculation, which is really all it is. No one doubts that our personal histories impact the way we see the world, but to suggest that a judge cannot be impartial because he is a Mormon disrespects him and smacks of hypocrisy when we argue that being gay did not unduly bias Judge Walker.

Judge Smith spends most of his dissent relying on cases from either before or during the Bowers v. Hardwick (1986) era: Baker v. Nelson (1971), High Tech Gays v. Defense Industry Security Clearance Office (1990), and Heller v. Doe (1993). Even if these cases are still technically good law, they all came before Romer v. Evans (1996) and Lawrence v. Texas (2003) changed the status of gay persons under the Constitution from criminals to protected class. At a minimum, then, we should approach these cases with a healthy dose of skepticism.

The dissent does not, opting instead to make two doctrinal errors:

The dissent's reliance on Baker v. Nelson ignores doctrinal developments in privacy and liberty since the 1970s.

In Baker v. Nelson, the Minnesota Supreme Court upheld the State's denial of marriage rights to gays, arguing that banning gays from the institution of marriage did not offend the Fourteenth Amendment's Equal Protection Clause. The plaintiffs appealed to the U.S. Supreme Court, arguing the same Due Process and Equal Protection claims that plaintiffs offered in Perry. But, the Court summarily dismissed Baker for lack of a federal question, which, according to Judge Smith, means that that the Perry plaintiffs' identical equal protection and due process claims are foreclosed. That is, if the Supreme Court thought the Baker plaintiffs raised no legitimate federal question, the same must be true for the same questions raised in Perry.

That conclusion disregards the doctrinal developments since Baker, including almost every pro-equality decision protection gay Americans, not to mention the personal and intimate liberty interests articled in Roe v. Wade (1974), Planned Parenthood v. Casey (1992), and Lawrence, to name just a few. Judge Smith acknowledges this reality with a bit of snark, quoting a bankruptcy court case, which is near the bottom of the federal precedent totem pole. But, it doesn't take a bankruptcy judge's decision to see that intimacy rights are different today than they were in 1971.

In response to a majority opinion in which Judges Reinhardt and Hawkins found Prop 8 unconstitutional because it took away a pre-existing right to marry from gay Californians and, in doing so, irrationally tried to advance even legitimate state interests, Judge Smith quibbled with the form of the majority’s rational basis test. But, he did more than quibble: he took a hatchet to it.

Judge Smith relied on Heller v. Doe to conclude that the Proponents of Prop 8 needed only "any reasonably conceivable state of facts" to "provide a rational basis" for discrimination against gays, and that their basis for Prop 8 could be "rational speculation" about those facts. Heller involved a challenge to a Kentucky law for the involuntary commitment of the mentally retarded, but was decided at a time (1993) where only the most permissive form of rational basis was used for every classification except those based on race, religion, national origin, and gender. Resurrecting that test today requires us to assume that our standards of review have not changed in 20 years. 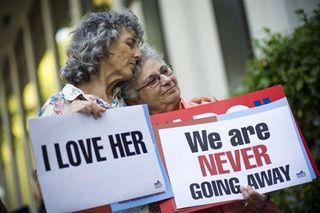 Of course, though, they have changed. After Romer and Lawrence, the Eleventh Circuit tried to apply an exceedingly low rational basis standard to a Florida law that banned gay people from adopting, and today, most scholars see that effort as a form of judicial nullification. In Lofton v. Secretary of the Department of Children and Family Services (2004), the court majority restricted Lawrence to its facts and found that a state could conclude that straight people were better parents even if the state was speculating on the basis of dubious science. Lofton's permissive test has come under fire from scholars — Bill Eskridge called it "judicial nullification" because of its attempt to make Lawrence irrelevant — and from subsequent courts: even Cook v. Gates (2008), the First Circuit's decision that accepted the validity of "Don't Ask, Don't Tell" didn't rely on this pre-Lawrence test. Plus, since Lawrence, various federal and state courts, not to mention the Obama Administration, have rejected rational basis review for discrimination on the basis of sexual orientation. Times have changed, except in Judge Smith's dissent.

But, more importantly, if it were true that a "conceivable state of facts" could be based on "rational speculation" about dubious science, the precise situation envision by Romer, where the absence of any legitimate interest leads to the inference of animus, would be impossible. We could always speculate in good faith about this or that theory, or, to use Judge Smith's words, anyone "might … believe[]" that a ban on gay marriage "arguably" furthers responsible procreation or "may promote" optimal parenting. For that matter, I might believe that moving to Boston arguably furthers my goal of getting tenure at Harvard; I would be wrong, but I wouldn't be irrational: Harvard is next door to Boston, so hanging around the dean's office may give me a jump on applying for faculty openings. In this way, by making the animus inference impossible, Judge Smith's exceedingly permissive rational basis text runs afoul of the Supreme Court's decision in Romer.

The dissent also challenges the majority's view that encouraging opposite-sex households as "optimal" could not be a legitimate state interest because Prop 8 left California's liberal adoption and domestic partnership law in place and only stripped the word "marriage" from gay unions. That is, if the state allowed gays to adopt, to be foster children, and have all the rights of married couples, it could not legitimately be in the business of encouraging one-man-one-woman homes. This is one case where logic is on the majority's side, but Judge Smith is not wrong. When reviewing state laws, federal courts have long recognized that one legislative body can rely on a stated reason even after that reason has been rejected by another lawmaking body. However, that interpretation of the rational basis test comes from 1993, before Romer and Lawrence changed the way we use rational basis for sexual orientation discrimination.

That said, Judge Smith highlights the inherent illogic of the majority's "narrow" holding.

As we have discussed, the majority declared Prop 8 unconstitutional because it took away rights already granted to gay Californians without any rational basis. But, as part of his discussion of Romer, in which he argued that the constitutional amendment at issue in Romer was much broader and more harmful than Prop 8, Judge Smith noted that Romer did not hinge on the taking away of rights that were already there. Rather, the Supreme Court only stated that Colorado's Amendment 2, which banned all local and state anti-discrimination laws that protected gay people, took away someone's rights in order to show that it targeted only gay people. In other words, the problem with Amendment 2 was not that it took away rights alone, but that it created a unique burden for one minority group.

This suggests that the Ninth Circuit's narrow holding may be based on shaky ground. Romer stands for the proposition that a state cannot pick out one minority for a special burden based on pure animus, not that a state cannot take away rights from one minority group based on pure animus. If the former is true, Prop 8 — not to mention other bans on same-sex marriage — is unconstitutional under the broad Due Process and Equal Protection grounds.

Notwithstanding this final intriguing point, Judge Smith used his dissent to resurrect old theories long discarded by doctrinal developments in federal law. He relies on antiquated precedent, tipping his hat that the forces aligned against gay marriage have no legs to stand on.