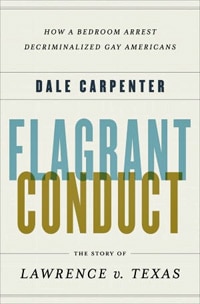 With certain gay media outlets fanning its flames, a false fracas is unfolding about Lawrence v. Texas. It is creating an issue out of nothing and, as a result, it is obscuring the undisputed good work done by Lambda Legal, the American Foundation for Equal Rights (AFER), and other legal organizations to win our rights through impact litigation.

The excellent Dahlia Lithwick takes to The New Yorker to review Professor Dale Carpenter's new book, Flagrant Conduct, which tells the sometimes-dramatic, sometimes-licentious, sometimes-mind numbingly arcane saga that precipitated the seminal decision in Lawrence v. Texas, a foundational case for every civil rights victory we will ever win. But, Ms. Lithwick took a scholarly book and learned the wrong lesson.

Professor Carpenter tells a story that most people do not know: about how the story started with four men drinking in an apartment, how policemen stormed into Lawrence's apartment looking for a gun but found none, how the worst thing the police saw was a lewd picture of James Dean, how Lawrence insisted on his innocence but pleaded "no contest" to challenge the anti-sodomy law, and how the men were poor, drunk, sometimes homeless, and probably not in love. But, although interesting, the particular personal histories of John Lawrence and Tyron Garner are irrelevant: Lawrence will always be a story about love because even if Lawrence didn't love Garner, their case legitimized gay love in the eyes of the law.

Ms. Lithwick also seems to imply that a lawyer's strategy to make the most effective arguments possible borders on deception or, in some way, makes the ultimate victory less wholesome. That is surprising coming from a lawyer, who should know that every case — from one that challenges a ban on marriage recognition for gays to one that seeks $500 in medical expenses for a slip-and-fall — has the same strategy: win.

Finally, she also misunderstands what gay rights cases are really all about. As I have argued many times, the traditional libertarian meme, "Get the government off our backs," will only get us so far. Texas may have had no business in Lawrence's bedroom that night in 1998, but our quest for the freedoms of intimacy, identity expression, and marriage is not a yearning for a small government that lets us do whatever we want behind closed doors; rather, it is a quest for social inclusion, societal honor, and the moral worth of a gay life's love. 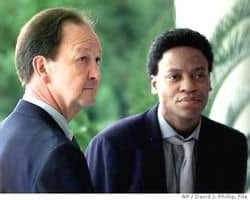 It is no secret that John Lawrence and Tyron Garner were not dating. Nor was it ever a secret that Mssrs. Lawrence and Garner had checkered pasts, including arrests and histories of drunkenness. To this day, none of us are sure what happened: two of the four officers called in thought they saw sex, but each remembered a different type of sex, and three officers remembered a lewd picture of James Dean on the wall.

In his book, Professor Carpenter starts from these undisputed facts and wonders: if the plaintiffs weren't in love and may not have even had sex, how did their case turn into one about sodomy and intimate relationships? There were a number of factors: victims of anti-sodomy laws were hard to come by, so it was difficult to find pristine plaintiffs; the sheer luck that a gay courthouse worker flagged the sodomy arrest and chatted about it until it got back to a gay activist with legal connections; and, the slowly changing popular view of gay persons. Professor Carpenter discusses the role each played.

But, as Ms. Lithwick describes in her review, the most important factor was Lambda Legal, caricatured as sweeping in to Lawrence's defense like Tabatha Coffey turning a grungy outhouse into a Beverly Hills' salon: this "imperfect test case could be made over into something more than serviceable." Ms. Lithwick goes on:

Lawrence and Garner understood that they were being asked to keep the dirty secret that there was no dirty secret. That's the punch line: the case that affirmed the right of gay couples to have consensual sex in private spaces seems to have involved two men who were neither a couple nor having sex. In order to appeal to the conservative Justices on the high court, the story of a booze-soaked quarrel was repackaged as a love story. Nobody had to know that the gay rights case of the century was actually about three or four men getting drunk in front of a television in a [Texas] apartment decorated with bad James Dean erotica.

The suggestion that this case had to "made over" in order to succeed implies that Lambda Legal was performing some kind of morally-suspect deception, creating an issue where none might have existed and whitewashing its clients into the hearts of history. To succeed, Lawrence required a "litigation strategy … [that] was deliberately framed to highlight the need to decriminalize homosexual conduct as a means of recognizing and legitimizing same-sex 'relationships' and 'families.'" Ms. Lithwick's use of quotes around the words "relationship" and "families" suggests that the disconnect between the Lawrence/Garner reality and Lambda Legal's story reeked of deception. After all, Tabatha Coffey can put a nice coat of paint on a poorly run business and, at the end of the day, all you have is a shiny, poorly run business about to fail.

My response to Ms. Lithwick: You're missing the point.

Lambda Legal took a case that needed to go to the Supreme Court: the continued acceptance of criminal anti-sodomy laws under Bowers v. Hardwick gave legitimacy to every piece of anti-gay legislation and every instance of anti-gay discrimination. It needed to go. And, Lambda attorneys crafted the best legal strategy to win: they chose the right lawyer, they told the right story, and argued the right cases to appeal to swing Justices. And, this is what every lawyer does if he wants to win. Law students learn to frame the facts in such a way that favors your client; you are, after all, telling a story. So, tell your story, because if the judge believes your story, your conclusions follow. That is why every brief starts with a facts section — the sides are arguing about what really happened, what the case is really about. As Kevin Cathcart, Executive Director of Lambda Legal, noted in The Huffington Post, "[t]he issue in Lawrence v. Texas was not about what was going on in John Lawrence's bedroom, but rather about the conduct of the government and the unconstitutionality of the law that authorized its actions." To conclude anything else is to miss the forest for the trees.

Impact litigation seeking civil rights is always about more than a given case's plaintiffs — just ask Kristin Perry and Sandra Stier, and Paul Katami and Jeff Zarrillo, the plaintiffs in Perry v. Brown. These four individuals, though brave and selfless for putting themselves in this position, are not perfect, nor do they have to be. But, their legal story is just as much about love as Lawrence's and Garner's was not because they are actually in love, but because the goal they seek — marriage recognition — is about love and family. The real deception, then, would be to couch our fight for marriage recognition in any language other than love.