Gay Facebook co-founder Chris Hughes tweeted late last night: "I am honored to take on the role of Publisher and Editor-in-Chief of The New Republic" 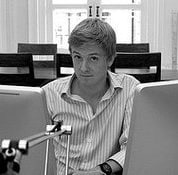 The NYT confirms Hughes' purchase of a majority stake:

The terms of the sale were not disclosed. Mr. Hughes said he was motivated by an interest in “the future of high-quality long-form journalism” and by an instinct that such journalism was a natural fit for tablets. He said he would “expand the amount of rigorous reporting and solid analysis” that the magazine produces.

Said Hughes:  “Profit per se is not my motive. The reason I’m getting involved here is that I believe in the type of vigorous contextual journalism that we — we in general as a society — need….But I’m investing and taking control of The New Republic because of my belief in its mission, not to make it the next Facebook."

Hughes also wrote a letter appearing on the magazine's website. reading, in part:

In the next era of The New Republic, we will aggressively adapt to the newest information technologies without sacrificing our commitment to serious journalism. We will look to tell the most important stories in politics and the arts and provide the type of rigorous analysis that The New Republic has been known for. We will ask pressing questions of our leaders, share groundbreaking new ideas, and shed new light on the state of politics and culture.

The New Republic has been and will remain a journal of progressive values, but it will above all aim to appeal to independent thinkers on the left and the right who search for fresh ideas and a deeper understanding of the challenges our world faces.

New Republic Gets an Owner Steeped in New Media [nyt]