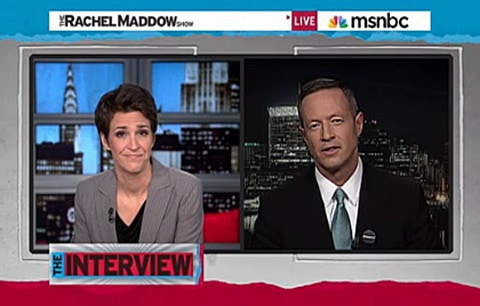 Rachel Maddow interviewed Maryland Governor Martin O'Malley last night in an extended segment on the recent marriage equality victories around the country and the ballot referendums which are challenging them, including information on a recent Maryland poll that shows voters split on the marriage equality issue.

Meanwhile, the AP reports on the election year showdowns on marriage equality in North Carolina, Minnesota, Maryland, Maine and Washington state and the "bruising battle" underway.

"It's crunch time," said Brian Brown of the National Organization for Marriage, the paramount fundraiser for opponents of gay marriage. "We view it as a massive opportunity for a national referendum."

Brown predicts same-sex marriage will be rebuffed in all five states, while gay-marriage supporters hope they can score at least a few victories and break a long losing streak. Since 1998, 31 states have had ballot measures related to same-sex marriage, and in every state the opponents ended up prevailing.

However, the most recent vote was in 2009. Gay-rights activists believe public opinion is moving inexorably in their direction, citing both national polls and policy developments such as repeal of the ban on gays serving openly in the military.

Previous Post: « Back in the 80’s, Karma Took Care of the Bullies, Then Everyone Had Refreshments: VIDEO
Next Post: TED Speaker Confronted by Spinning Beach Ball of Death: VIDEO »