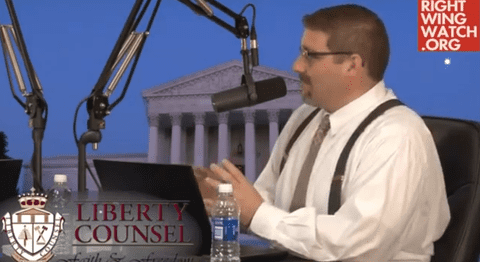 Explaining why he thinks it’s alright — indeed, a duty — for nations to outlaw same-sex love, hateful Liberty Counsel activist Matt Barber today claimed there’s no such thing as anti-gay discrimination or violence, so arguments against discriminatory laws are disingenuous.

What’s happening is they’re using this specter of some kind of notion of ‘mass violence’ committed against homosexuals, they do the same thing here in the United States, ‘mass discrimination,’ something where there is no evidence of course against people who are engaged in these behaviors. They use that as a Trojan Horse to force, to compel nations and individuals and groups and churches that embrace traditional values, relative to sexual behavior, to push them into the closet and say ‘no, no, you have to adopt a full affirmation of these perversions.’

Watch the video, via RightWingWatch, AFTER THE JUMP…