As I mentioned earlier, today the New Hampshire House is scheduled to vote on the disgusting HB 437, which would repeal the state's marriage equality law, replace it with civil unions, and introduce a non-binding ballot measure asking people to vote on whether they approve of the new civil union law.

And here's some of the logic we're up against.

I wanted to pass along an email exchange I had with Representative Dan McGuire (pictured). I sent identical emails to my four representatives (all happen to be Republicans), and I have only received the one response. In my initial email, I had no idea where any of them stand on LGBT issues. For this reason I wasn't interested in wasting my time trying to appeal to them; I just wanted to express my opposition to the bill. Rep. McGuire will apparently not be voting as I had hoped. This wasn't all that shocking to me, but as I read the email I became more and more perplexed and disgusted with his logic. It is worth mentioning that his wife is also a Representative. I'm just hoping she doesn't have access to his grandfather's dictionary… 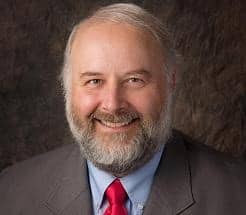 I am not familiar with your record or your positions on gay rights, but, as your constituent, I ask that you vote against HB 437. I am not here to make moral, philosophical, or constitutional arguments about why repealing the state’s marriage equality law would be unjust and cruel. I am not here to try to convince you that my relationship is worthy of the same recognition as anyone else’s. I don’t need to convince you that I’m a good citizen, a decent person or that my life is not destined to be a sad story because I am gay. It’s dehumanizing. I don’t need to be accepted, but I must be respected and protected under the law. Gay marriage has had no negative effect in New Hampshire, except in the minds of those who don’t understand what it means to the LGBT. As I said, I don’t know your beliefs or your familiarity with LGBT people, and if you don’t already know in your heart that HB 437 is a disgrace there is nothing I can say here to change your mind. However, it is my job as your constituent to let you know my position, and leave it to you to do the right thing.

McGuire's response, AFTER THE JUMP…

Thank you, Lance, I appreciate this email.  Unfortunately I am not going to be voting your way, but I would like to tell you my reasons.

First of all, I do have three close female relatives, all living in California, including my mother and sister, who have been in long term lesbian relationships.  My sister even has been married and divorced under California law.  She isn't too happy about it now because she had been with her partner for a dozen years or more, then her partner lost her job, so my sister married her in order to get medical benefits for her partner from my sister's employer.  Fast forward five years, and my sister got a bit tired of being the only breadwinner, and they got divorced.  Unfortunately in California you pay alimony for the same length of time as you were married, so my sister now owes her former partner five years worth of alimony.  And since the feds don't recognize same sex marriage, that alimony is not tax deductible as it would normally be.

Because HB 437 restores civil unions, all it is about is the word, "marriage".  It is not the legislature's place to determine the meaning of simple words, that is up to the culture.  When I went to college in 1975, my grandparents gave me a brand new American Heritage dictionary.  It says that marriage is the legal union of a man and woman as husband and wife.  That certainly wasn't controversial then, so the question is whether our culture has changed enough in the intervening years that we have a new usage.  I don't think so.  Just a few years ago, we had a ballot question on this subject here in Epsom, and the vote was 2 to 1 or better to retain that definition.

I consider this debate to be an example of political correctness.  Political correctness tries to win arguments and control thought by twisting the meaning of words.  If "marriage" can be redefined to be two guys, two girls or one of each, then all those relationships are automatically a family, and it is the end of any discussion of what is appropriate in all circumstances.  Should two guys adopt children?  Be foster parents?  Be able to cage health insurance from the employer of one for the other?  Should the book "Heather has two mommies" be used in kindergarten?  What interest does the state have in what two guys do?  Once the word is redefined, then all those kinds of questions can no longer even be discussed because the language itself excludes certain thoughts.

It's getting late, and I hope I've explained my reasoning well enough.  I'm sorry it is not more to your liking, but please feel free to write again on this or another subject.  One possible bright spot is that if a version of the bill passes, it is likely to be the one that includes a ballot referendum, so we will get a very good idea of what the voters think on this issue.