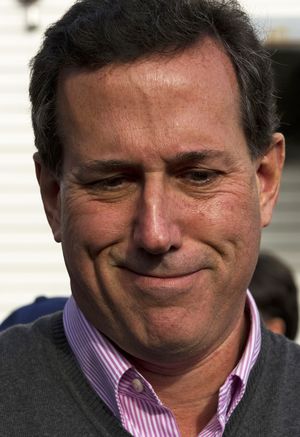 It's a good time to be Rick Santorum. Not only did Santorum stomp Mitt Romney in yesterday's Louisiana primary — the former senator has, it, seems, overcome his "Google problem." This is according to The Daily Caller, and a cursory investigation suggests it's true. "Spreading Santorum," the Dan Savage website created to radically redefine Santorum's surname, no longer even on appears on the first page of search results when one Googles "Rick Santorum."

The campaign sounded a triumphal note in The Daily Caller:

“The word Santorum is more relevant to Rick’s campaign,” Pasi explained in response to a question about the topic during a breakfast at Google’s Washington, D.C. offices Friday.

Pasi speculated that Savage had success with his campaign to disparage Santorum because “he had a huge platform through his columns to say go ahead and search for this, link to this.”

…That all changed as the campaign heated up and the campaign website got “inbound links from the New York Times” and other top news websites.

Early in his campaign Santorum petitioned Google to ban "Spreading Santorum" from its searches altogether, or at least demote it to the rear pages of search results:

He said then that Google “has repeatedly on more than one occasion taken down sites, taken down searches for folks like Barack Obama and Michelle Obama, but has left it out there for me for 10 years so people can be exposed to the most horrific filth that you ever want to see.”