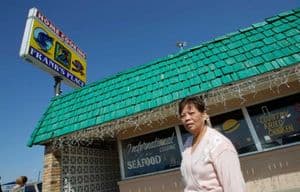 You know Frank's Place. It's one of those greasyspoon cafes where the same people chug bottomless coffee cups every morning and share vaguely antagonistic banter. This particular greasyspoonery happens to be in Johnson County, Texas. It's owned by a Ms. Phon Vang Meter, and until 2009 was regularly patronized by Benny Dale Morris. No longer. According to WLUK-TV, the vaguely antagonistic counterbanter ceased to be amusing when Ms. Phong Vang Meter began to joke that Benny Dale Morris and his very close friend Glen Warren were lovers.

Now Morris calls Meter an "evil old woman. (She's 73; he's 75.) After the alleged gay-calling three years ago, Morris sued Vang Meter for "defamation of character" and "intentional and negligent infliction of emotional distress." Vang Meter calls Morris a liar. "All he wants is my money," she says. And he may have it. A Johnson County District Court ordered Vang Meter to pay Morris $5,000, and to cease insinuating that Morris and Warren are anything other than straight dudes who are totally secure in their masculinity.

But Vang Meter isn't taking this lying down. According to WLUK-TV:

The 10th Court of Appeals in Waco upheld the District Court ruling, leading Van Meter to appeal to the Texas Supreme Court, saying there isn't enough evidence to prove that she defamed him or caused him anguish. Her attorney, Norman Maples, suggests what on the surface appears to be an argument between two former friends could have First Amendment consequences about what can and can't be said in public, even in jest. The Supreme Court has not [yet] taken the case.

Maples points out that upholding the previous ruling would effectively make actionable ribbing, joking, barbing, and all kinds of verbal horseplay between ostensible friends. (Which is, it's worth adding, what draws a lot of people to greasyspooneries like Frank's in the first place.) Morris's lawyer argues that it's always libelous to say untrue things about a person, and that he doesn't know why Van Meter was "so mean."