Twice last week, we heard about public school administrators who silenced the pro-gay expression of their students. At Fullerton High School in Orange County, California, an assistant principal disqualified Kearian Giertz from participating in the school's Mr. Fullerton Pageant after that student answered the stock question — "Where do you see yourself in 10 years?" — with some refreshing candor: After saying he wanted to fall in love with the man of his dreams, Mr. Giertz hoped that "10 years from now gay marriage will be legal in California." 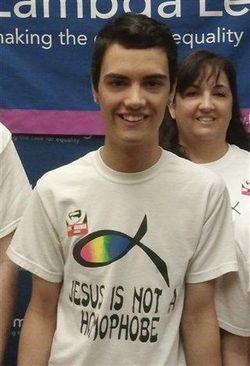 Fullerton administrators have apologized, admitting only that the principal acted inappropriately. Waynesville leaders just made a tiny concession to Maverick, likely the result of the nudge from Lambda Legal. The school still called Maverick's speech "sexual" in nature. But, it's hard to see how a Christian message of love is sexual, unless you believe that all words that begin with "homo" are toxic, engendering stereotypical images of sex, sweat, and sodomy. Fullerton and Waynesville officials are wrong: Kearian's and Maverick's statements were Constitutionally protected conduct, not something to be addressed in private or only permitted on one day per year.

These cases demand that we think about the implications of our pro-Maverick and pro-Kearian positions: If we affirm Maverick's First Amendment right to say that "Jesus is Not a Homophobe" in a public school, must that freedom extend to his counter-protester who wears a t-shirt that says, "Be Happy, Not Gay" or "Homosexuality is Shameful" or "Be Ashamed, Our School Embraced What God Has Condemned" or "Straight Power"? If we believe that free speech is a limit on the state's power to silence any legitimate speech, it seems like we must accept the hateful bully alongside the tolerant messenger. It is, after all, a free country where Thomas Paine might disagree with us, but fight to the death for our right to express that disagreement free of censure. I would like to offer another option: Under the Supreme Court’s student speech jurisprudence, school discipline of identity-based aggressors is consistent with student First Amendment rights and need not silence pro-tolerance and pro-acceptance speech. 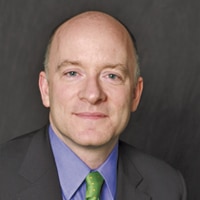 Mr. Clark's (pictured) complaint for Lambda foreshadows a straightforward First Amendment challenge: Maverick's t-shirt was a form of symbolic speech and expressive conduct that is protected by the First Amendment. His decision to wear the t-shirt neither caused any disruption nor interfered with school activities. And, by prohibiting Maverick's expression, school officials silenced otherwise protected speech and exerted a chilling effect on student speech without a counterveiling compelling government interest.

But, I have been involved in cases where conservative groups say the same things about Christian messages of intolerance brought to school. A t-shirt that reads "Homosexuality is a sin" or "Be Happy, Not Gay" is a form of symbolic speech and expressive conduct, as well. In those cases, the t-shirt did not cause any substantial disruption: the most it did was cause discussion among students, which, without more, is insufficient to justify school discipline.

Comparing the two kinds of speech is, however, illogical. The latter is identity-harassment; the former is identity-affirming. Identity-based harassment has no place in schools or in civil discourse.

Identity-based aggressors highlight an intrinsic quality essential to someone's personhood and demean it, deprive it of value, and use it as a weapon. They attack women, racial minorities, religious minorities, and other traditionally victimized groups. And, as such, they attack not only their particular victims, but also their victims’ communities. They commit a constitutional evil not only because their behavior interferes with victims’ access to education, their liberty to express who they are, and their right to participate in our body politic, but also because they perpetuate the legitimacy of a malodorous social stigma attached to any given minority status.

And, yet, despite this reality about identity-based harassment, much of it goes unpunished because courts confronted with free speech defenses to school discipline of student speech approach those cases myopically. Most student speech questions are governed by four Supreme Court cases. 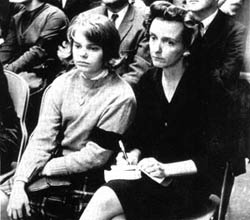 Tinker v. Des Moines involved a classic silent protest of the Vietnam War, in which eight students wore black arm bands to register their anti-way views. The Court protected that speech from school discipline because it caused no "substantial disruption" to school or "infringed on the rights of others."

In Bethel School District v. Fraser, a young man was punished for delivering a lewd speech at an assembly and the Court upheld his punishment, citing the view that promoting lewdness was inconsistent with the purpose of public education.

The Court also upheld the censorship of articles about teen pregnancy and divorce in a student newspaper in Hazelwood School District v. Kuhlmeier, holding that a school could control student speech that bears in the official imprimatur of the school.

And, in Morse v. Frederick, a school lawfully disciplined a student who held up a "BONG HiTS for Jesus" sign at a school-sponsored Olympic rally, noting that a school could silence speech that could reasonably be seen as promoting illegal drug use.

In each of the latter three cases, schools did not have to show a "substantial disruption" to merit discipline: lewdness, official speech, and drug speech merited special consideration.

Most courts would say that speech that is not lewd or official or drug-related falls under Tinker, thus requiring a clear showing of a "substantial disruption" (or, at least, the expectation of one). Yet, wearing a t-shirt to school that calls gays shameful or sinful or diseased does not always cause such a ruckus that rises to the level of a substantial disruption. That mode of analysis misses the forest for the trees. Identity-based harassment need not cause a riot, but because it targets not just one victim, but victimizes an entire group and silences them and makes them feel worthless, its evil is far greater than an administrator having to take time out of his day to address a student protest.

Besides, all four Supreme Court student speech cases have one consistent underlying rationale: the reason we restrict any student speech is because of the effects that speech has on something – on the teacher, or his/her ability to teach; on the administrator, or his/her ability to function in her official capacity; on the school, or its reputation, success, or curricular mission; and, of course, on classroom discipline.

Identity-based harassing speech differs from tolerant speech on controversial topics, then, because a school that countenances the former is a sick school, one that teaches hate and incivility, that gives tacit approval to the silencing of minority voices, and that fails to prepare students for a civic-minded adulthood in a republic.

Wearing a t-shirt that says "Jesus is Not a Homophobe" is not identity-based aggression: there is no deeply held characteristic of a marginalized group that is used as a sword against it. Allowing Maverick to wear his shirt would not force the school to tolerate "sexual" speech, as the shirt is not sexual. Nor would it put the school in a position that is anathematic to public education. But, speech that singles out a minority and beats down all those who share a core, defining characteristic will always be a stain on any school.