Dr. Robert Spitzer, a psychiatrist who published a controversial 2001 study suggesting that in rare instances gay people could change their sexual orientation, has retracted those claims in an American Prospect article by Gabriel Arana. Spitzer had led the effort to declassify homosexuality as a mental illness in 1973, and the 2001 article was an attempt, according to Spitzer, to "question 'whether everything you've been taught is wrong.'" 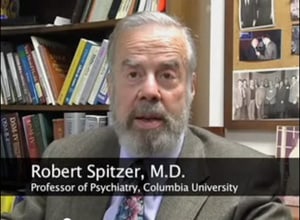 The study continues to be cited by proponents of "ex-gay therapy" (the notion that you can pray away the gay) as the chief piece of evidence that such therapy works; the fact that he is not a flack for the ex-gay movement and is an atheist made it hard to say he was biased. But when I met Spitzer in March, he asked me to retract the study. It's quite a stunning reversal, and I got the sense that this had troubled Spitzer for some years.

Spitzer spoke about how he was uncomfortable with groups like Focus on the Family misusing his study, in a 2007 interview.

Here's Arana's article with the retraction:

Spitzer was drawn to the topic of ex-gay therapy because it was controversial—“I was always attracted to controversy”—but was troubled by how the study was received. He did not want to suggest that gay people should pursue ex-gay therapy. His goal was to determine whether the counterfactual—the claim that no one had ever changed his or her sexual orientation through therapy—was true.

I asked about the criticisms leveled at him. “In retrospect, I have to admit I think the critiques are largely correct,” he said. “The findings can be considered evidence for what those who have undergone ex-gay therapy say about it, but nothing more.” He said he spoke with the editor of the Archives of Sexual Behavior about writing a retraction, but the editor declined. (Repeated attempts to contact the journal went unanswered.)

Spitzer said that he was proud of having been instrumental in removing homosexuality from the list of mental disorders. Now 80 and retired, he was afraid that the 2001 study would tarnish his legacy and perhaps hurt others. He said that failed attempts to rid oneself of homosexual attractions “can be quite harmful.” He has, though, no doubts about the 1973 fight over the classification of homosexuality.

“Had there been no Bob Spitzer, homosexuality would still have eventually been removed from the list of psychiatric disorders,” he said. “But it wouldn’t have happened in 1973.”

Spitzer was growing tired and asked how many more questions I had. Nothing, I responded, unless you have something to add.

He did. Would I print a retraction of his 2001 study, “so I don’t have to worry about it anymore”?

Wayne Besen at Truth Wins Out calls on groups like PFOX and Focus to immediately stop "relentlessly and shamelessly" flogging Spitzer's study.

Now it is up to anti-gay and so-called “ex-gay” organizations to show some dignity and class by expeditiously removing all citations of Dr. Robert Spitzer’s study from their web pages. This is nothing short of a major integrity test to show which groups are honest and decent enough to do the right thing.

Watch Spitzer's 2007 interview talking about his discomfort with the improper usage,
AFTER THE JUMP…

Previous Post: « Liberian President Backs Off Statements About Gays, Said She Would Block ‘Extremist Legislation’
Next Post: ‘Jesus Is Not a Homophobe’: Identity Harassment and First Amendment Rights at School »