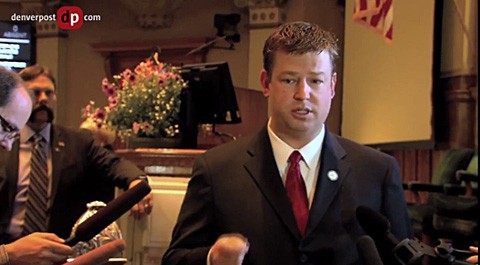 Even though it had the votes to pass, Colorado House Speaker Frank McNulty (above)sent the civil unions bill to the House State Affairs Committee, where it will be killed, the Denver Post reports:

Asked why he sent the bill to House State Affairs, known as a "kill committee" because its members are all in safe seats, McNulty again spun the discussion back toward Hickenlooper.

"This is Gov. Hickenlooper's special session that he called for the purpose of passing same-sex marriage," the speaker said, continuing his practice of equating civil unions legislation as the same legal footing as marriage. "From our perspective, our side is focused on job creation and economic recovery. We ought not and we should not be spending time on divisive social issues when unemployment remains far too high and far too many Coloradans are out of work. . . .It's unfortunate that this scenario has played out where it appears that Gov. Hickenlooper is out of touch with Coloradans."

Watch interviews with McNulty and House Minority Leader Mark Ferrandino, AFTER THE JUMP…

Previous Post: « Towleroad Guide to the Tube #1124
Next Post: Gay Indianapolis Teen Expelled for Stun Gun is Attacked at the Mall »