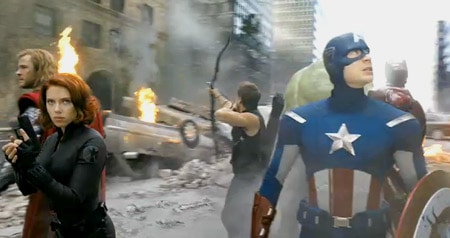 If Agent Natasha Romanoff can interrupt an espionage interrogation to attend…

And if Dr Bruce Banner can come out of self-imposed exile to join Marvel's THE AVENGERS, then I really ought to be able to revive this review column! Let's go.

After roughly four years of movie-length commercials for The Avengers (formerly known as: Iron Man 2, Thor, and Captain America: The First Avenger) "Earth's Mightiest Heroes" have finally assembled. To fans of the superhero genre, this probably feels like an impossible dream realized. To non-fans of the superhero genre this might play like the perfect time for a showstopping climax -take a bow and give mere mortals some movies again! The latter group should brace themselves. This particular blockbuster is lively enough to greenlight an even bigger movie family of men (and hopefully some women) in tights.

Marvel wisely handed the reigns over to writer/director Joss Whedon who is still best known for creating one of the greatest TV shows of all time (Buffy the Vampire Slayer) and who has only directed one previous feature (Serenity). Though I'm a big Whedon believer, the opening moments worried me. The film starts with a brief but dull outerspace prologue designed to tell us that the Earth will soon be threatened (Duh! The superheroes have to protect the world from something). Without context this unfortunately brings Green Lantern's information overload opening to mind though it's happily the last completely useless scene in the film. Once Loki (Tom Hiddleston) steals the glowing cube of power known as the Tesseract from Nick Fury (Samuel Jackson) at S.H.I.E.L.D., the story is jolted to life. (Loki also steals Jeremy Renner but who wouldn't?)

Why is Hulk chasing The Black Widow ?

Superhero vs superhero and other visual wonders AFTER THE JUMP… 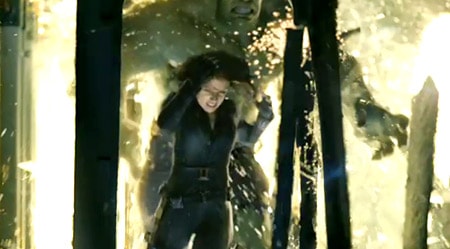 Sorry but I can't tell you!

I don't want to spoil any plot details but let's just say that Joss Whedon is basically the world's greatest fanfic writer. He finds numerous clever ways to pit the superheroes against one another throughout the course of the action even though they're on the same side. Hero vs. Hero has always been a staple, however convoluted in the details, of both comic book narratives and fan fiction but we rarely get to see it onscreen.

Like most modern blockbusters that supersize themselves The Avengers, at 142 minutes long, has its duller patches. The heroes spend an awful lot of time on minor bickering and self doubt on an invisible floating ship that doesn't have quite enough character to sustain a third of the movie. Loki's outsourced alien army is also depressingly personality-free and derivative but that's a minor quibble as there's plenty of big personas around waiting for their turn to shine. The Avengers' multiple character introductions aren't as gracefully swift as Serenity's remarkable opening scene, but Whedon's dependable talent for finding the humor and fissures and alliances within group dynamics is put to fine use. Somehow they made an Avengers movie without any of Earth's Mightiest Egos demanding the spotlight. Even the Black Widow (Scarlett Johansson), merely extraneous eye candy in Iron Man 2, is used about as well as you could possibly hope for. 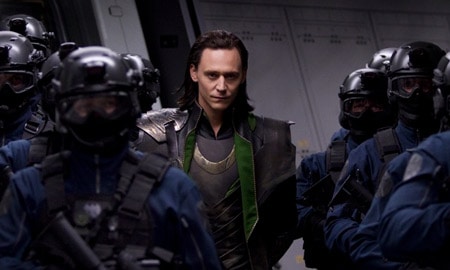 Whedon's bravest gambit in the storytelling might be the way he handles The Hulk (Eric Bana Ed Norton Mark Ruffalo). He pins much anticipatory weight on the where and the when and the how quickly Bruce Banner might Hulk out, confidently assuming the audience will beg for it, ignoring the fact that Hulk has a reputation for boring them on the big screen. Mark Ruffalo's wonderfully mellow screen vibe makes for a nice bit of counterintuitive casting yet you still believe him when he says he's angry all the time. Whedon and Ruffalo (through motion-capture acting) make the Hulk so entertaining, in fact, that he gets the single biggest laugh in the movie. It's a blink and you'll miss it comic beat in the middle of the finale's mayhem.

And what glorious mayhem. Though The Avengers never reaches the pop iconography heights of Spider-Man 2 (my choice for Best Superhero Film) and it doesn't even attempt the majestic gravitas of The Dark Knight (most people's choice for Best Superhero Film) preferring to keep it light and quippy, its final act is so big and crazy and super-powered that you leave on a true high. I'm still thinking of its most eye-popping moments: Thor's hammer meeting Captain America's shield; Iron Man's unusually vertiginous costume change; A billion dollar complex sinking into the earth; Loki's sorcery and Tom Hiddleston's equally magic acting; The Hulk sliding down skyscrapers; Chris Evans' ass in sweatpants. 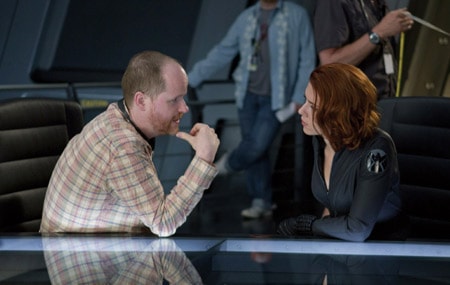 That sound you hear exiting the theater is not just the aftershocks of multiple geek orgasms, but the crying jags of Warner Bros executives. They famously gave Joss Whedon the boot on the still languishing Wonder Woman movie. Damn, but she would have lassoed the world anew with Whedon guiding her.

Previous Post: « Hillary Clinton Tells Bullies, ‘Take a Hard Look at Your Actions and the Pain You Cause’: VIDEO
Next Post: Dan Savage To Debate Brian Brown! »