Dharun Ravi, the former Rutgers student who spied on Tyler Clementi and contributed to Tyler's death, received a sentence of 30 days in jail and 3 years of probation. He is to perform 300 hours of community service, undergo counseling, and pay a $10,000 fine that will go to an organization providing assistance to victims of bias crimes. This sentence is significantly more lenient than the decade in jail Mr. Ravi could have received. 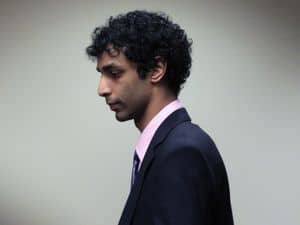 I agree with Nathaniel Frank over at the Huffington Post, who said that Mr. Ravi's behavior was "inexcusable." His actions surely contributed to Clementi's death" and "were malicious, irresponsible, dehumanizing, and criminal." And yet, like Mr. Frank, I was almost "relieved" to hear that Mr. Ravi would not face the maximum sentence. I would have been somewhat more satisfied with a few-month sentence rather than a one-month sentence, but that is not the point. In a previous, somewhat controversial prior column on the Tyler tragedy, I argued what Mr. Frank would argue later: That we have to be careful not to focus our search for justice solely on one individual where greater social forces are to blame and then prematurely congratulate ourselves and wash our hands of the responsibility to address those social problems once Mr. Ravi's trial is over.

Here's part of Mr. Frank's take, worded much more artfully than mine:

While Ravi must take responsibility for his actions, we are all accountable, not just him. Anti-gay sentiment lies deep within many, perhaps most, of us, as does an atavistic urge to denigrate and exclude out-group members. The fact that this may be our hardwiring — evolved from a time when we lived in tribes of 50 to 100 closely related individuals — in no way justifies indulging those impulses, but it does remind us that we have to fight against them rather than pretending they don't exist and acting like those who exhibit our darker side are outliers. And punishing one dumb kid for failing to rein in his dark side primarily serves to make us feel better when it shouldn't, to shift the burden of responsibility to anyone but ourselves. How did the 20-year-old Ravi grow up in a world where he thought any of this was OK and might even win him praise?

While Mr. Frank's column touches on the sociological forces that created the circumstances for Mr. Ravi to think that his disgusting behavior was permissible or normal, he mostly focuses on what it means to seek "justice" for Tyler, his family, and yes, even Mr. Ravi and his family. I would like to touch on that topic today.

The Tyler Clementi case, Mr. Ravi's trial, and the hate crime enhancements that could have sent Mr. Ravi to prison for a long time epitomize the tension between an emotional desire for retributive punishment — the idea that bad acts deserve punishment for no other reason than the categorical view that bad acts deserve social condemnation — and a smarter, case-by-case appreciation for the palliative or deterrent effect of the law. I argue that hate crime enhancements are almost exclusively retributive and their across the board application risks turning the criminal law into a tool of vengeance.

The retributive theory of punishment posits that punishment is justified on the grounds that wrongdoing merits punishment; that is, the criminal gets punished because a criminal deserves to get punished. There is no utilitarian or forward-looking benefit to punishment in this model because punishment is valued without reference to the contingent benefits that the public might (or might not) enjoy. Punishment, then, is Kantian — it is justified in and of itself, independent of any benefit that may accrue to a society.

A necessary corollary to any retributive penal model is that if a criminal should be punished because he deserves it then he deserves to be punished in accordance with his desert, no more and no less. This is the theory of proportionality. Proportionalists argue that the severity of punishment should be commensurate with the seriousness of the wrong because, as Professor Andrew von Hirsch has argued, the purpose of punishment is to express a society’s distaste for certain conduct and the amount of punishment reflects the magnitude of that distaste. Any disparity between the punishment and society's view of how "bad" the criminal act was would be illogical.

The retributive doctrine of proportionality, then, animates the public's zeal for criminal penalties in severe bullying cases and hate crime cases. Tyler died and we want justice! But, we should really think more about what "justice" means in this case. Does justice mean 10 years in jail for a stupid kid who never apologized? Does justice mean deportation? Will any form of justice fill the void left by Tyler's tragic death?

In some ways, an emotional connection to justice is quite logical. As Professor Samuel Pillsbury has noted, both critics and admirers of the retributivist model agree that much of the moral weight behind the criminal law comes from our emotional reactions to wrongdoing. Such emotion is a fundamental trait of humanity and can explain why we want criminal laws in the first place. Our reactive emotions — the emotions inspired by wrongful acts — are what inspired us to create criminal laws to deal with wrongful acts in the first place. Therefore, the emotional or intuitive desire to hold Mr. Ravi responsible for Tyler's death arguably reflects a foundational feature of the criminal law.

A problem arises when this emotional desire for retribution is the only justification for a law. Consider the debates surrounding tough anti-bullying laws in New Jersey and Massachusetts and part of the discussion in Congress over the Matthew Shepard Act, the federal LGBT-inclusive hate crime law. Legislators read stories of victims and argued that perpetrators "deserved" punishment. They said that the acts were "heinous" and "merited social stigma." They wanted to "send a message" that beating up a gay kid and leaving him for dead is just as bad as lynching a black man. This goal is admirable: all laws have an expressive side and society needs the reminder that violence against gays is morally reprehensible.

However, there are three problems with the emotionalizing of law. First, it risks the exclusion of other, more meritorious reasons for passing criminal laws, such as deterrence. During the hate crime law debates in Congress, there was precious little discussion about when precisely to apply hate crime enhancements. Nor was there any evidence entered into the record that these laws actually reduce the number and severity of hate crimes. (Just to be clear, hate crime laws may indeed deter hate crimes. My point is simply that the animating factors behind legislatures passing tough anti-bullying punishments and hate crime laws have been retributive, not deterrence-related.).

Second, these laws are purposely written broadly. They have to be; otherwise, they could not have the expressive effect of enforcing the social norm that all homophobic violence is bad. They can apply to Mr. Ravi and to the villainous bigots who killed Matthew Shepard. But, few rational thinkers could confuse the perpetrators' level of culpability.

Third, a solely retributive law is no better than a purely vengeful one. The retributive concept of punishment is meant to be distinguished from revenge or retaliation based on its point of view — namely, retribution focuses on society's assessment of the defendant's wrong, whereas vengeance depends upon the impulse of the victim, or his kin, supporters, or friends, to strike back.

In the bullying and hate crime context, a retributive impulse is the state's response with tough criminal laws, whereas revenge occurs when the bullied victim or the hate crime victim and his affinity group fight back and bully or assault their harassers. Offering his defense of retributivism, Professor Douglas Husak admits that retributivists commit a logical jump from a criminal's desert to state-imposed punishment. According to Professor Husak, retributivists can argue that culpable wrongdoers deserve suffering, which can — but need not — be imposed by the state. It is punishment's attendant suffering that satisfies our intuitive and emotional responses to criminal conduct, not the fact that such suffering is imposed by the state.

After all, devices other than state punishment can satisfy the demands of retributive justice. A victim's kin can exact their own retribution, just like a bullying victim can respond to harassment by physically assaulting his tormentor. Although retributivists like Professor Husak believe in state monopolies on punishment and universal denial of a personal right to revenge, those beliefs cannot stem from retributive theory alone. There is, then, no principle internal to retributive theory that distinguishes between vengeance and state-imposed punishment.

Therefore, if proposals to criminalize egregious bullying and to enhance punishments for hate crimes are justified solely by their retributive value, such proposals are no more justified than a law that allows bullying victims to attack their tormentors with abandon or for gay persons to exact group revenge against gay bashers. Justice cannot be purely emotional. If it were, we'd be a clan culture based on so-called honor, or vengeance, killings.

The tragedy that befell Tyler requires us to hold the most culpable person responsible, and that is Mr. Ravi. But, as I have argued, the legal regime that would have justified a long and harsh sentence lacks internal consistency, reason, and all the indicia of good policy. Mr. Ravi should be punished, but how he is punished — and our response to his sentence and his disappointing behavior — will say more about the maturation of our society and our ability to distinguish emotion from reason as a legitimate basis for criminal laws.

Postscript: This column is based on an article of mine published in the latest issue of the Temple Law Review. For those interested, it is available for download here.