In a move doomed to alienate a signiicant hunk of her fanbase, Carrie Underwood has revealed to the Independent that she is a strong believer in marriage equality: 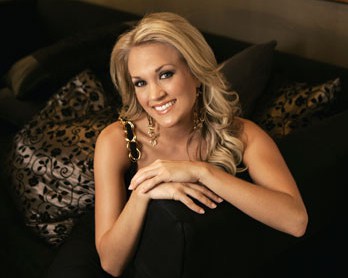 Ms. Underwood was speaking to the British newspaper in preparation for her first-ever concert in the UK, which shall be held at the Royal Albert Hall later this month. (Incidentally, Underwood isn't the first American country star to visit London and make statements which might annoy her red-state fanbase. It was there that the Dixie Chicks' Natalie Maines famously voiced her unhappiness about the United States' rush to war in Iraq.)

Underwood … draws much of her fanbase from evangelical Christians, speaks frequently about her faith and has made religion the subject of several of her best-known songs, including the No 1 country hit "Jesus Take the Wheel".

She said, however, that her liberal attitude towards same-sex marriage comes because of her Christian values, rather than in spite of them. Though raised a Baptist, a church that tends to oppose homosexuality, Underwood and her husband Mike Fisher, a professional ice-hockey player, now worship in a non-denominational congregation.

"Our church is gay friendly," she said. "Above all, God wanted us to love others. It's not about setting rules, or [saying] 'everyone has to be like me'. No. We're all different. That's what makes us special. We have to love each other and get on with each other. It's not up to me to judge anybody."

Underwood, 29, swept to fame in 2005 after winning American Idol and has since drawn much of her estimated $20m (£13m) annual income from touring the US. In the interview, she condemned "people who use the Bible for hate", adding: "That's not how I would want myself as a Christian to be represented."

Underwood's new album, Blown Away, and her single, "Good Girl," currently occupy the top spots on the Billboard country charts.