The absurdity began Wednesday, when Democratic Rep. Lisa Brown assumed the dais to protest Michigan's new anti-abortion law. She said her piece, and concluded her address with:

I have not asked you to adopt and adhere to my religious beliefs. Why are you asking me to adopt yours? And finally, Mr. Speaker, I’m flattered that you’re all so interested in my vagina, but no means no. 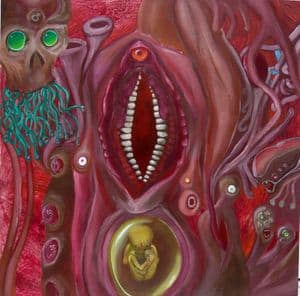 Republicans were scandalized. Rep. Brown had mentioned her naughtybits! Right there in the Capitol, in the citadel of democracy most holy! Vagina! As Republican state rep. Mike Callton put it:

What she said was offensive. It was so offensive, I don't even want to say it in front of women. I would not say that in mixed company.

Callton and his fellow legislators promptly and indefinitely banned Rep. Brown from speaking in the Capitol, along with Democratic Rep. Barb Byrum, who is also reputed to possess a vagina.

Now, Brown, Byrum, seven other legislators, assorted Michiganer actresses, and author Eve Ensler have announced their plan to vaginize the Capitol with a performance of Ensler's The Vagina Monologues on the Capitol steps. The performance shall be held Monday, from 6 – 8 p.m. The event has been dubbed "Vaginas Take Back The Capitol," and it has its own Facebook page.