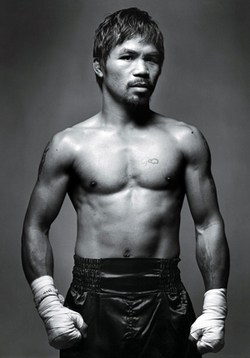 Manny Pacquiao, the boxer who last month caused a stir by coming out against gay marriage, sat down with USA Today to chat about his upcoming bout with Floyd Mayweather and, yes, same-sex nuptials. The boxer again said that he doesn't back marriage equality and that he thinks gay people are committing a sin.

“No, I don’t support gay marriage. I do not agree with that, but I am not condemning gay people," he said. "But what I oppose is the sin they commit.”

Let me just remind you that this judgement comes from a man who has made a living beating up other men. Just saying.

You can watch Pacquiao's interview
AFTER THE JUMP.