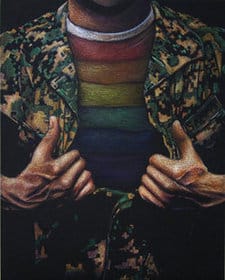 The team at Servicemembers Legal Defense Network and other concerned citizens are celebrating the introduction of a House bill that will guarantee military men and women's same-sex spouses the same rights as their straight counterparts.

Remarking on the bill, which Democratic Rep. Adam Smith of Washington State unveiled yesterday, SLDN executive director Aubrey Sarvis said, "[House Armed Services Committee] Ranking Member Smith has recognized with the introduction of this legislation today that 'Don't Ask, Don't Tell' repeal – while a monumental achievement for gay and lesbian service members and all Americans – does not finish the job of ensuring full equality for these brave patriots and their families."