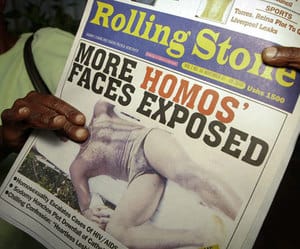 The United State government has said that it will not provide aid or assistance to nations that criminalize homosexuality.

While that's not entirely true — look at Egypt, for example, where gay people are institutionally ostracized — David Axe at Wired reports that the Ugandan government's zealous crusade against LGBT people may complicate a "proxy shadow war" the U.S. has been waging against Somali militants:

The growing LGBT schism between the U.S. and Uganda threatens one of the most remarkable alliances in recent years. Since the deaths of 18 American troops in Mogadishu in 1993 — the Black Hawk Down incident — the U.S. has been reluctant to deploy significant forces onto Somali soil, even as Islamic militants took advantage of a devastating civil war to seize huge swaths of the East African country.

Instead, Washington recruited proxy armies to do American bidding in Somalia. The Pentagon’s direct involvement includes naval bombardments, air strikes and deadly commando raids launched from a constellation of secret bases. But U.S.-trained and -supported African troops do most of the hard fighting, and almost all of the dying, in the grinding battle against Somali Islamists. America’s Somalia intervention isn’t just a shadow war — it’s a proxy shadow war.
…
But Kampala’s persecution of gays could compel Washington to end the alliance before it has a chance to expand beyond the Somalia campaign.

Officials say that Uganda is the second most important military ally we have on the Eastern African coast. Do you really think the Defense Department is going to call of its actions to uphold LGBT rights? And, more importantly, do you think the Ugandan government will change its tune to keep reaping in that sweet, sweet American dollar?