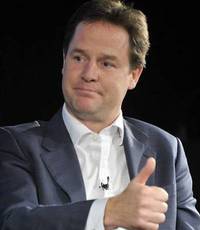 Prime Minister David Cameron and other lawmakers in England are trying to strike a balance between people rallying for marriage equality and religious institutions trying to stop progress.

While some are suggesting that same-sex marriages simply be a civil affair, and therefore not held in churches, deputy Prime Minister Nick Clegg wants to see a law that includes religious institutions that support inclusion.

"I don’t see why two individuals who love each other and want to show commitment to each other should not be able to do so in a way that is socially recognized as being marriage."