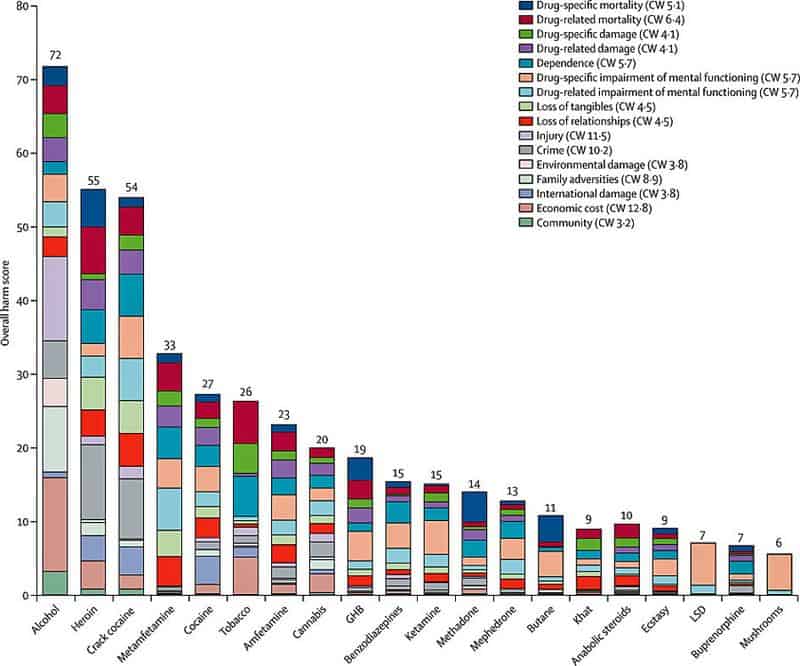 Former UK drug czar David Nutt has spent his entire career studying the impact of drugs on people's lives and society at large. Again and again he comes to the same conclusion: when familial dissolution, personal mismanagement and other intangible factors are taken into account, alcohol takes the largest toll of all drugs.

Here's a taste of his findings, paraphrased by Thomas Kleppestø:

In the diagram above both individual and societal factors are considered. It may come to a surprise to many readers that LSD and ecstasy are one of the least dangerous drugs. Notice also that Alcohol is the highest rated dangerous drug and that tobacco is on seventh place just below Cocaine (Both alcohol and tobacco are not even considered a drug by many people, including, sadly, politicians). However, heroin, crack and metamfetamine tops the list for the most dangerous drugs when only individual factors are considered, alcohol then dropping down to a fourth place amongst the most dangerous drugs. So, even when the obvious societal effects due to the widespread use of alcohol are not considered (alcohol rates very high, unsurprisingly, on “family adversities” and “environmental damage”) it still is the fourth most dangerous drug. Yes, that’s right. Alcohol nearly receives the bronze-medal for danger to individuals.

You can click on the image above to pop it out and take a better look at the breakdown.