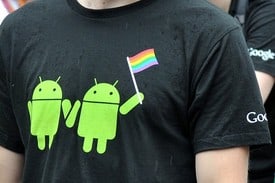 Google, one of the nation's most LGBT-friendly companies in the United States, is exporting its inclusive philosophy abroad through a "Legalize Love" set to launch tomorrow in first Poland and Singapore and then, they hope, the rest of the world.

Gay Star News says the campaign "will tackle places where it is illegal to be gay, or where there are other anti-gay laws or where the culture is homophobic."

Google, long known for their pro-LGBT business practices, has a clear goal.

The company's Mark Palmer-Edgecumbe says: "We want our employees who are gay or lesbian or transgender to have the same experience outside the office as they do in the office. It is obviously a very ambitious piece of work."

Google will join forces with other non-government organizations (NGO's) to lobby the governments.

Singapore is specifically mentioned, says Palmer-Edgecumbe, because it "wants to be a global financial center and world leader [and being] a world leader means you have to treat all people the same, irrespective of their sexual orientation."