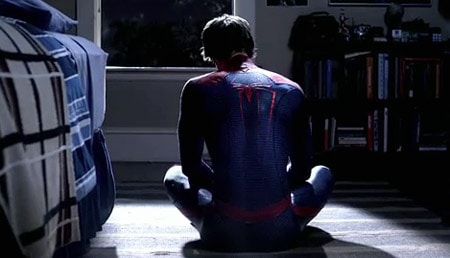 Andrew Garfield pondering the mask that brings the cash

Déjà vu  is an unsettling feeling. You can’t quite place the why and whens of it but you know you’ve experienced whatever this is before. Not so with the reboot of Spider-Man which has been optimistically retitled “THE AMAZING SPIDER-MAN” for 2012.  The new webslinging film arrives only five years after Spider-Man 3, that final sour note in Sam Raimi’s otherwise sweet trilogy. This déjà vu iseasy to place with the “whens” and thus less unsettling if still perplexing on account of the “whys”. We’re back to summer 2002 when Peter Parker first pined for a high school sweetheart, first indirectly contributed to his uncle’s murder, first learned that with great power comes great responsibility, and first swung around a big screen Manhattan in his iconic red and blue spandex.

Franchises are the comfort food of the movies and though there’s nothing wrong with comfort food beyond its lack of nutritional value, so much depends on the delivery when it comes to the familiar pleasure. The Amazing Spider-Man spins its title card with webbing very swiftly which leaves you hoping for a zippy entertainment with key twists on the mythos to keep you engaged. But after a new corporate thriller prologue featuring Peter Parker’s heretofore unseen parents the movie settles into excessively familiar story beats. We’re forced to wait out the entire numbing origin story again and relive many story beats from the 2002 origin story, with the only major exclusions being the absence of Parker's employment at The Daily Bugle (weird) and no James Franco shaped obstacle to his girl’s affections. Other than that only the names of the major characters have changed: Blonde Gwen Stacy (Emma Stone) stands in for Redhead Mary Jane Watson (Kirsten Dunst) as the love interest Peter likes to photograph; Dr Curt Connors/The Lizard (Rhys Ifans) stands in for Norman Osborne/The Green Goblin (Willem Dafoe) as the scientist Peter looks up to whose illegal human experimentation (on himself!) wreaks havoc on his mental stability and turns him into an ugly green baddie. 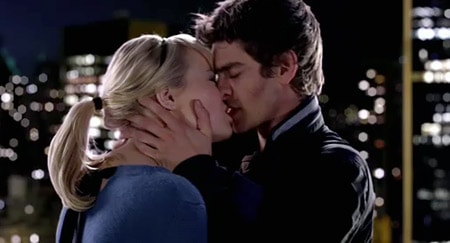 Director Marc Webb, who made a whimsical splash with his debut film (500) Days of Summer seemed like an inspired choice for reviving the pop romantic sensibility of Spider-Man but nothing between Gwen & Peter ever lands with the force of that upside down kiss. What the new-but-also-old Spider-Man has going for it is a stronger sense of the hero's extremely flexible physicality and fighting style (Andrew Garfield has been doing his yoga). 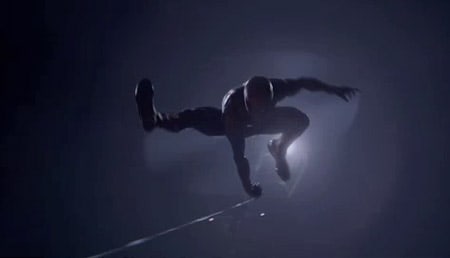 Webb comes through with a few instances of visual invention like a scene where Spider-Man creates an entire web in the sewers to function as a motion detector and a POV shot from the superhero’s swinging point of view which featured in an early teaser. Otherwise it’s mostly more of the same which might not be such an enormous problem in a less superhero satured movie culture. 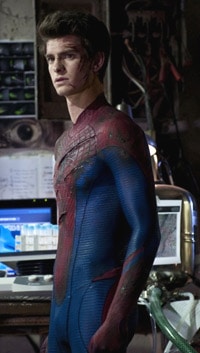 Tobey Maguire has stepped aside for Andrew Garfield and at first Peter Parker 2.0 seems like an improvement since his lanky frame looks so very right in the skin tight Spider suit and the screenplay hands him the kind of wisecracks that comic book readers missed in Raimi's trilogy. But eventually Garfield’s long limbed swagger and emotive confidence as a screen actor starts to chafe against the character… at least when he's out of spandex.  It’s all just too easy for him. Though he tears up frequently there’s none of the awkward growing pains that marked Tobey Maguire dazed portrayal. This Peter's “awkward” flirtations with Gwen Stacy are so crush-worthy that they feel less like an everyman nerd’s discomfort and more like a pick-up gimmick, like Peter 2.0 can’t imagine not nabbing the girl. Emma Stone and Andrew Garfield have fine onscreen chemistry (and offscreen chemistry too as it turned out) but their romance never once feels like the happy miracle of the Maguire / Dunst pairing, just a given from the first Meet Awkward frame. Maguire vs. Garfield is Corny Sincerity vs Cocky Heroics… so I suppose it's a matter of taste.

This Spider-Man also loses the pop pleasure of Raimi's brightly colored palette (I blame Batman that most superhero movies, The Avengers aside, prefer to be dark and gritty now) and the sly joking about sexual adolescence (no sticky fluids escape Parker’s body this time that he didn’t plan on). Worst of all it has none of the joyful sense of discovery (admittedly harder to capture the fourth time around).  In short it's less magical. Not “Amazing” at all.

Dr, Curt Connor’s one-armed tragedy is that in seeking to do good with cross species genetics (he hopes to restore lost limbs to combat veterans via reptilian DNA), he does evil instead. The Amazing Spider-Man’s best new image comes via Connors first transformation when he wakes to find a malformed log-like appendage where his new arm should be. He begins tearing at it with his good hand, and it turns out to be only a shell, a scaly arm cocoon. A fresh slimy new human hand emerges from its ruins. The new arm soon fails him in multiple ways. It’s a stunning icky image and even a handy metaphor for the movie. Sony would like to regrow their billion dollar franchise but this new attempt only looks promising. Dr. Curt Connors has never quite solved the problem of macular degeneration and the movie studio hasn’t really answered the question of “why does this exist?” beyond, of course, new piles of easy cash. 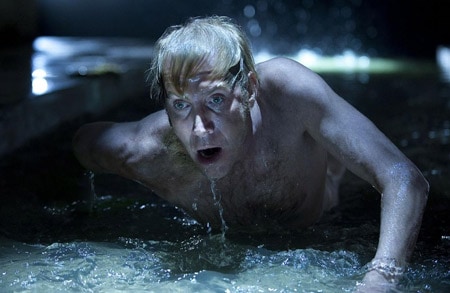