One year ago yesterday, committed gay couples started getting married in New York State. Of course, they had been marrying for years — in Massachusetts, in Europe, or affirming their lifelong commitment in some other way. But, when Governor Cuomo's marriage recognition bill became law and then took effect last year, the dreams of so many gay men and women were realized. Even those of us who are single or otherwise not yet ready to get married felt the importance of the state treating us equally, recognizing our value, and bestowing upon us the honor of full social recognition.

What have we learned since? 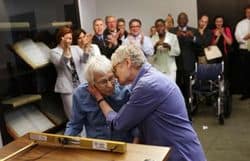 We've learned that marriage recognition is an economic boon. We've also learned Phyllis Siegel can marry her long time partner, Connie Kopelov (right), and the sun will still rise every morning. And, we've learned that being on the correct side of the marriage debate can make political careers and enhance presidential ambitions.

Today, I would like to discuss two more lasting lessons. First, the successful strategy that worked in New York can be replicated to win most of the marriage recognition contests on the ballot this November. The coalition of Freedom to Marry, the Empire State Pride Agenda, the Human Rights Campaign, Marriage Equality New York, and the Log Cabin Republicans formed a plan that brought in business, civic, and religious leaders together to not only oppose discrimination, but to prove to the majority of the state that marriage recognition for gays was a social good.

Second, the win for marriage in New York — followed by President Obama's vocal support for marriage recognition for gays — has changed the tone, tenor, and substance of the debate. Whereas before Governor Cuomo's bill became law, conservatives wore their hatred of gays as a badge of honor, defining their conservatism and proving their holier-than-thou bona fides, these days, opposition to gays in love or gays in the military or gay scout leaders is something to keep quiet, to deemphasize in public, and to hope no one asks about.

After speaking with some folks involved in the marriage debate in New York State, including lobbyists, leaders and staffers at the coalition of gay rights groups, and businesspersons who came out in favor of marriage recognition, the strategy for victory seemed clear: Leverage a large, multifaceted, bipartisan group of influential stakeholders to show that marriage recognition is not a gay rights revolution, but a manifestation of American values. Republican donors and gay Republican activists, whose politics more aligned with New York Republicans than, say, their Missouri counterparts, put their money and feet on the ground in upstate Republican districts. Business leaders argued that the lack of marriage recognition prevents them from treating their gay employees equally, threatening a loss of talent to Connecticut, New Hampshire, or Massachusetts. And, without the Democratic Party and Governor Cuomo's principled leadership, the bill never would have come to the floor.

It seems to me that we can replicate this strategy in Maine, Minnesota, and Washington. All three states have active Republican parties that are more moderate than their national cousins, giving Log Cabiners and other gay Republicans an opening. All three states have powerful business communities that are willing to spend time, money, and good will on the side of marriage recognition. And, in Minnesota and Washington, the Democratic Party machinery is powerful (and Maine's liberal independent streak may obviate the need for strong Democratic leadership). New York's marriage recognition quest may have gone through the legislature and the fights in Maine, Minnesota, and Washington are at the ballot; but, the successful strategy can remain similar.

Some strategists are concerned about Maryland, where the business community is not as large as in some other states, where liberal Republicans are a mess, where the gay marriage group has failed to raise as much money as their friends in other states, and where black churches are impossibly strong cultural forces. Still, Governor Martin O'Malley is a strong leader who has committed himself to the marriage recognition cause and, as his Baltimore mayoral and gubernatorial elections have shown, is not to be underestimated.

On a grand scale, the successful New York strategy may be a blueprint for future success. But, the tenor of the debate has also changed, and that may be the most lasting contribution of a law that more than doubled the number of persons that live under full marriage rights.

Legitimization of marriage for gay persons — first by state courts, then by state legislatures, then by President Barack Obama, and soon by state-wide voters — marginalizes the antiquated homophobia of the opposition. When the Boy Scouts discriminated against James Dale in the 1990s, no one other than Lambda Legal came to his rescue. Today, heterosexual former scouts, current board members, and business leaders are cutting ties to the Scouts as they continue to discriminate. When Chic-Fil-A decided that its terrible burgers should be the arm of its version of God's will, only Rush Limbaugh and Michelle Bachmann came to its side. And, Representative Bachmann is in the midst of being denounced by even conservative Republicans for being particularly hateful. Now, there are rainbow Oreo cookies, Pride parties at the Pentagon, Republicans in the House of Representative coming out in favor of marriage recognition, 33 Senate co-sponsors of the bill to repeal the odious Defense of Marriage Act, and celebrities finally feeling comfortable enough to come out publicly as gay. Hearts and minds are changing.