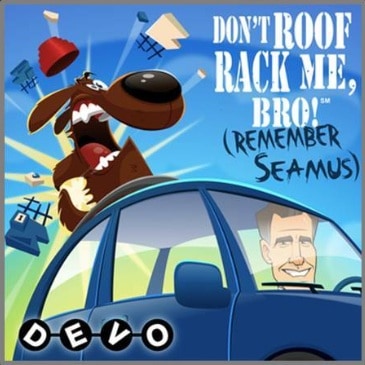 DEVO, well known for their 80's hit "Whip It", are releasing a song about Mitt Romney and the abuse of his pets, the Guardian reports:

Twenty-nine years ago Romney took his family on a 12-hour road trip from Boston to Ontario, strapping the family dog to a kennel on their car roof. As the Chevrolet station wagon barrelled down the highway, Seamus clung on for dear life; even after the dog suffered a diarrhoea attack, Romney just sprayed everything down and continued with the journey.

The song is part of a campaign by Gerald V Casale, one of Devo's founders. Remember Seamus proposes to "make 2012 the year where animals like Seamus are valued and honesty is praised". The group has rallied behind Dogs Against Romney, a Facebook page with more than 70,000 fans, and Casale has also contributed to a forthcoming video game, The Crate Escape: Seamus Unleashed, which is due on 26 August – National Dog Day in the US.

Here's their Facebook page, Dogs Against Romney. And the official site.