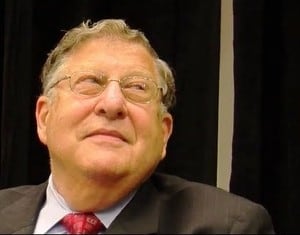 Former New Hampshire Gov. John Sununu is a breakout star at this year's Republican National Convention, due both to the fact that Sununu was the politico who officially nominated Mitt Romney as the GOP presidential candidate and because, after about two decades out of the spotlight, Sununu's — er — unique personality is on full display for a new generation of politically-minded Americans.

Though typically eager to chat about almost any issue under the sun, Sununu surprised Siriux XM radio host Michelangelo Signorile's by dodging his questions about marriage equality.

Asked about the RNC platform's discriminatory language on equality, as well as Mitt Romney's commitment to a constitutional amendment prohibiting same-sex nuptials, Sununu said the topic was simply too "complicated".

"I think there are some issues that need national respect but I really do think that states ought to be dealing with this until there is a resolution at the national level," he said, before copping out on further explanation: I don’t want to get into a debate on this thing. It is much more complicated than just throwing a couple of answers into a radio interview. So I’m going to pass on it.”

Then, after being asked about Romney's politics, Sununu told Signorile:

Perhaps conservative self-reliance goes straight out the window when it comes to buying beer?

You can listen to audio of Sununu and Signorile's conversation at The Huffington Post.