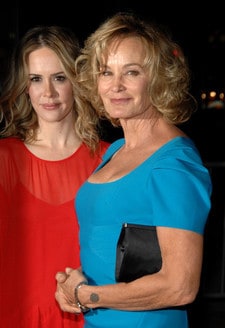 According to anonymous "friends," Paulson provided a shoulder for Lange to cry on after Lange and playwright Sam Shepard called it quits after 27-years.

The women, who have been friends for years and recently co-starred together on American Horror Story, apparently let their bond become into a love affair, according to the paper.

Lange's team, however, say this "blossoming love" business is a bunch of hooey, telling another tabloid, The Daily Mail: "This story is completely fabricated and untrue."