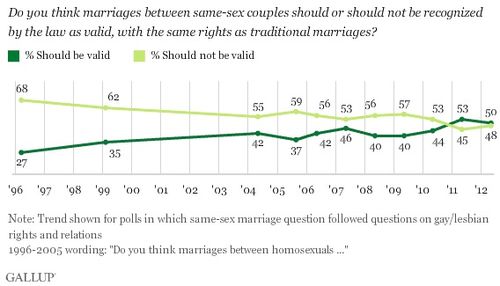 With voters in Minnesota, Maine, Washington state and Maryland all weighing in on marriage equality this November, Paul Waldman at The American Prospect offers a great, concise history of the same-sex marriage debate here in the States and looks forward to a not-so-distant future in which enshrined discrimination may be a thing of the past:

…Just as with laws on interracial marriage, legalization of same-sex marriage is likely to spread toward the center and south of the country, though how fast is hard to say. In 2009, Nate Silver attempted to project how long it would take for each state to be ready to vote to allow same-sex marriage; the final two in the projection were Alabama in 2023 and Mississippi in 2024 (consider that Alabama didn't officially repeal its law banning interracial marriage until a referendum in 2000, and 40 percent of Alabamians voted to keep it). As Silver acknowledges, this kind of projection could well be wrong, but it does give us an idea of the path we're on.

In either case, the Court could affirm discrimination of gay couples, outlaw it, or take some middle course that puts off a definitive decision. That all may hinge on whether Anthony Kennedy has come around to believing that marriage is an inalienable right that all Americans should enjoy. I wouldn't bet the farm on that—the Court seldom gets too far ahead of public opinion. But the direction of that opinion is unmistakable, as all but the most deluded conservatives activist will tell you.

But they'll still try to tell you.

Previous Post: « A Profile Of Edie Windsor, The Incredible 83-Year Old Fighting For Equality: VIDEO
Next Post: Eric Holder To LGBT Lawyers: You Have ‘Solemn Responsibility’ To ‘Safeguard’ Rights »