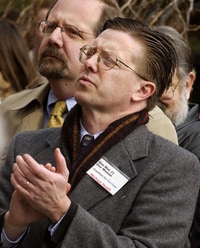 Michael Heath is really taking the new conservative meme — equality activists are violent like Floyd Corkins — to the next level. Heath, the outspoken anti-gay stalwart who called same-sex marriage "monstrous insaneness," released a statement today in which he says allowing marriage equality in Maine would lead to the "sort of violence" seen at Family Research Council's HQ this week.

"If Maine doesn't end this decades long conflict over the evil of sodomy with an overwhelming NO vote in November we can expect to see this sort of violence in Maine in the near future," said Heath, referring to the referendum that could legalize marriage equality.

"Homosexuality can lead to the most horrific and violent consequences in individuals and society. The twin cities of Sodom and Gomorrah were destroyed because of it."

Heath then takes the fear-mongering one step further by noting that he's getting a gun to protect himself, and others. From his press release, which is written in third person: "Heath is awaiting receipt of his concealed weapons permit from the Maine State Police. He claimed it is the responsibility of all good men to be prepared to protect innocence from evil. Force must be met with force so that innocent people are not harmed."

The statement also notes that Heath will be speaking at Beastfeast, an event at which – and this is a quote – "men who respect hunting and firearms come together to enjoy the results of the hunt — they eat meat."