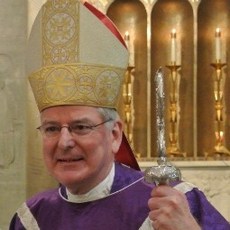 Minnesota Archbishop John Nienstedt is trying to blur the lines between church and state with a letter encouraging Catholics in that state to vote for a measure that would constitutionally ban same-sex marriage there.

In the letter, claims that marriage equality "licenses the romantic preferences of same-sex adults"and that while "every sign of unjust discrimination" against LGBT people "must be avoided," voters must approve "God's plan for marriage".

Zack Ford at ThinkProgress notes that Nienstedt's letter is "an exemplar of cultural abuse, simultatenously feigning compassion while advocating discrimination."

Ford also notes that Nienstedt's letter was read at dozens of Catholic churches in Minnesota last week and that many pro-equality parishioners walked out of service as a result and that many parishes flat-out refused to participate in Nienstedt's hateful politicking and that a Facebook page called "I am Catholic. I am voting NO!" is gaining steam in the Land of 10,000 Lakes.