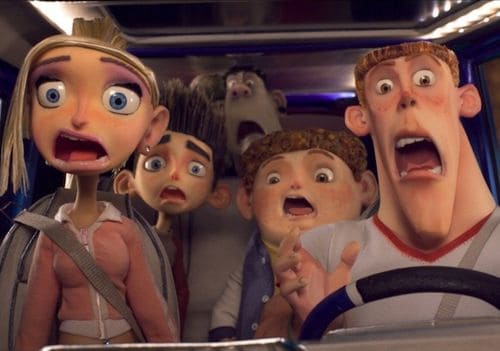 Conservatives are having a fit over news that a jocky character in the new stop-motion film ParaNorman is gay. Nancy French gripes at National Review that "parents who take children to the new movie ParaNorman might have to answer unwanted questions about sex and homosexuality on the way home from the movie theater" after the character, Mitch, casually comes out at the end of the flick.

William Bigelow at Breitbart, meanwhile, takes the gurgling hysteria a step further and presents the plot twist as some kind of trick by nefarious gays.

"ParaNorman" has a character named Mitch, who is, of course, a heavily-muscled jock who seems heterosexual until the end of the movie, at which time a girl named Courtney asks him if he wants to see a movie.

Sure, he says, you’ll just love my boyfriend, who’s into chick flicks.

Yes, gays in film should either be twisted, pathological villains or eccentric outsiders. Never, ever jocky or remotely likeable.

If you haven't seen trailers for ParaNorman yet, I've included one AFTER THE JUMP.