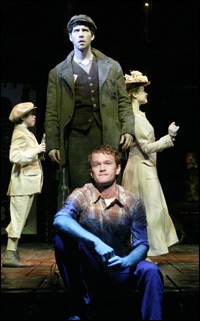 The production marked the Broadway debut of a property that already had a 1991 Off-Broadway staging and cast album. PS Classics ended up recording the Broadway cast, too, offering the most complete disc of the Americana-laced show set in the conceptual world of a carnival's shooting gallery, where scenes and people emerge from the shadows.

The concert is a benefit for the Roundabout Theatre company. Tickets go on sale August 21.