Paull Ryan likes to say he loves Ayn Rand. But, if you take a look at his record in Congress, he has been no acolyte of the libertarian novelist. Mr. Ryan has been, at best, a loyal politician who voted for everything President George W. Bush wanted, including every law that expanded the size of the federal government and every tax cut that drained its resources and every war that spilled its blood and money, and then opposed everything President Barack Obama wanted even if those policies would shrink the debt, deficit, and the size of government. Only when President Obama and the Democrats come to power did Mr. Ryan return to what we may be his honest beliefs and advocate for the radical shrinking of Washington. He has been a consummate politician bent on survival and a radically social conservative one, at that, not a radically libertarian one. 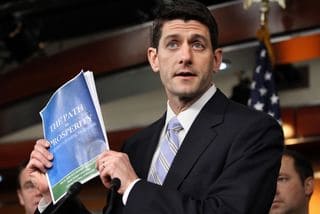 Mr. Ryan was no Randian — he supports banning abortion in all cases, he supports constitutional amendments to enshrine marriage discrimination into our law, he supports treating gay persons and gay couples differently than their heterosexual peers. He has expressed his opposition to gays adopting children. He even co-sponsored a few bills, including a personhood provision, with this week's villain du jour of the GOP, Todd Akin.

If anything, as Conor Friedersdorf wrote in The Atlantic, Mr. Ryan has been a Randian villain: He supports using the force of the state against citizens (see The Patriot Act, the "war on drugs"); he supports federal regulation of sexual behavior and intimate relationships (see DOMA, gay marriage, abortion); he has no private identity (he never held a non-government job); and, he believes in God (Rand, famously, excluded God from her universe).

But, despite his checkered, inconsistent, hypocritical past, Mr. Ryan has staked out his future using Randian rhetoric and substance, at least in the spheres of economics and social welfare.

A Randian Constitution would be tiny. Negative rights — freedom from government intrusion — would be absolute. The government would protect the nation and do little else. It would not intervene to protect against discrimination (private businesses and organizations could fire gays, blacks, and women if they wanted to, but good luck to them!). It would let everyone marry; it would probably be out of the business of marriage entirely, leaving such solemnities to whatever existed outside the state.

If Paul Ryan had his way, the Constitution would sometimes take its cue from Ms. Rand; other times, from the Family Research Council. Odious, indeed, but that's anything but Randian. AFTER THE JUMP, let's discuss this terrifying prospect.

Mr. Ryan may have no history as a Randian, but he keeps telling us he does and has made proposals that suggest his pure libertarian heart in the economic realm (except, of course, for his and Mitt Romney's tax plan, which would raise taxes on middle and low income Americans). In a speech last year, he said that "the enforcement of contracts" is protected by the "constitutional cornerstone of our free society." That is constitutional code for a return to the legal regime in place before the New Deal, typified by the famous 1905 case, Lochner v. New York. Lochner was about a maximum hour law in New York: the state legislature said that bakers could never work longer than 14 hours in one day. That law, like almost every other labor law, limited the employers' and employees' freedom to make contracts on their own. After all, the Court implied, if bakers want to work 16 hours in a day, the Constitution gives them that freedom.

Justice Oliver Wendell Holmes (and others) had a different idea. In his dissent, he argued that the Constitution does not exist to enforce one particular economic scheme, i.e., laissez faire capitalism. Eventually, the rest of the Court — and most of the mainstream political arean — would agree.

Based on his speeches to the Federalist Society, a conservative legal group, the ultra-conservative Kirby Center for Constitutional Studies and Citizenship (founded by Clarence Thomas's wife), and elsewhere, Mr. Ryan believes that many federal labor laws are unconstitutional. He has never explicitly advocated for an end to the federal minimum wage, but his interpretation of the Constitution would require its repeal. His antiquated interpretation would also destroy collective bargainining rights, scrap federal child labor laws, and end adequate working condition requirements.

As the Atlantic's Matthew O'Brien reminds us, Mr. Ryan supports a radical shift in the mission of the Federal Reserve. Currently, the Fed is charged with both keeping inflation under control and keeping employment as close to 5% as possible. Mr. Ryan thinks that's a pretty bad idea. The Fed should return to focusing solely on "sound money," which, by the way, used to be economic code for returning to the gold standard, but in 2012, means not using monetary policy (interest rates) to worry about unemployment. The Fed's job, Mr. Ryan said in a 2011 grilling of Fed Chairman Ben Bernanke, was not to print money, but to worry about the inflation monster waiting in the wings, and nothing more. Let us be clear: sustained high inflation is a terrible thing; but, Mr. Ryan is calling for a radical change in the goals of monetary policy that would generally benefit the wealthy at the expense of small business owners and workers who need easier flow of money in tough economic times.

So far, this is quite Randian.

But, the Ryan plan for the future departs from Ms. Rand's libertarianism. He has advocated not only for a constitutional amendment to define marriage based on his particular brand of Catholicism, but for a constitutional amendment that would destroy a woman's right to choose. He believes a fetus is a person. He has committed one of the greatest Randian heresies by insisting that religious institutions should be exempt from federal taxes, and proposes to commit another by giving religious houses and any affiliated institution the right to flout what few federal and state laws would exist under a Ryan regime if those laws conflict with their religious beliefs.

Nor is Mr. Ryan an equal opportunity believer in religious freedom. His website reports with pride everything he has done to support the war on terror, including his refusal to vote for bringing our troops home from Afghanistan, his support for the very costly Iraq War, and, most strikingly, his decision to exempt the military from any cost-cutting in his budget.

Ms. Rand would be appalled.

In truth, Mr. Ryan says he's a Randian because, in Republican circles of 2012, it's cool to be a Randian. He leverages the rhetoric of a radical libertarian to appeal to the Tea Party and most Americans' very legitimate, but exceedingly uninformed concern about the debt. Then, he turns back to Congress and votes like a social conservative, a Randian villain. There are many things to like about Mr. Ryan — at least he's talking about our long term fiscal health. But, if you like Ayn Rand, you should not like Paul Ryan.