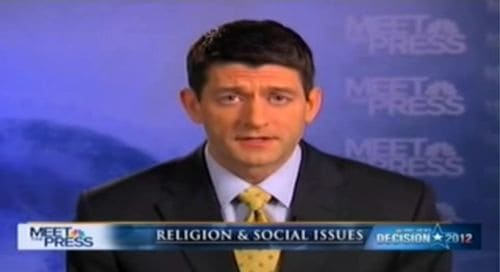 Mitt Romney's new running mate doesn't like to talk about LGBT issues. He doesn't go out of his way to talk about any social issues — he's a money man, and he's most comfortable making technobabblish arguments about how middle-class people can benefit from unfettered capitalism. But Rep. Ryan does have his opinions.

Gay City News has compiled a neat summary of Rep. Ryan's legislative relationship with gays. He was for the Employment Non-Discrimination Act, and then against it. He voted against hate crimes legislation. He twice voted for a federal marriage amendment defining marriage as the union of one man and one woman. And so on. From Gay City News:

[The Human Rights Campaign] does not issue congressional scorecards until the end of a two-year session, so no rating is available for 2011-2012. In the prior five scorecards, Ryan received four zeroes and one rating of 10 out of 100, for his half-hearted support of ENDA in 2007.

But don't expect Rep. Ryan to trumpet this record on campaign trail. He probably won't talk about the gays unless he's asked. And when he is asked, his answers are wont to be as bland as they are bigoted. Watch Rep. Ryan explaining his position on marriage equality, AFTER THE JUMP …