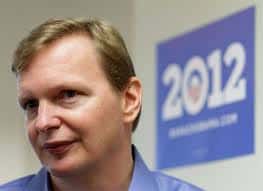 Obama for America campaign manager Jim Messina issued this statement this morning, in response to Mitt Romney's selection of US Rep. Paul Ryan as his running mate:

In naming Congressman Paul Ryan, Mitt Romney has chosen a leader of the House Republicans who shares his commitment to the flawed theory that new budget-busting tax cuts for the wealthy, while placing greater burdens on the middle class and seniors, will somehow deliver a stronger economy. The architect of the radical Republican House budget, Ryan, like Romney, proposed an additional $250,000 tax cut for millionaires, and deep cuts in education from Head Start to college aid. His plan also would end Medicare as we know it by turning it into a voucher system, shifting thousands of dollars in health care costs to seniors. As a member of Congress, Ryan rubber-stamped the reckless Bush economic policies that exploded our deficit and crashed our economy. Now the Romney-Ryan ticket would take us back by repeating the same, catastrophic mistakes.

The Obama campaign's already got a slick anti-Ryan page on the web, and it talks about Paul Ryan's difficult legislative relationship with women and gayfolk:

Ryan voted against the Lilly Ledbetter Fair Pay Act, which helps women fight for equal pay for equal work. He voted against repealing the discriminatory policy of “Don’t Ask, Don’t Tell,” and supports writing discrimination into the Constitution by amending it to ban gay marriage.