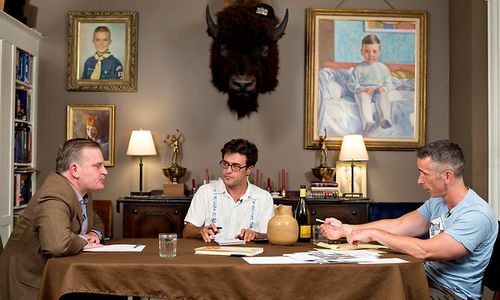 Now that video has been posted of that dinner between Dan Savage and Brian Brown — the meal at which the famed equality activist debated the infamous anti-gay marriage advocate — journalist and debate moderate Mark Oppenheimer has taken to the New York Times to offer his honest take, including an honest admission of how often the men disagreed and its impact on him: "Everytime they disagreed, I drank some more." A natural response, to be sure.

After the dinner was over and the wine had worn off, Oppenheimer asked the participants, including Savage's spouse Terry Miller, about their shared experience. It seems no one truly enjoyed themselves, and Savage wishes he had held the event on neutral ground.

Mr. Miller pronounced the entire night a waste of time. “Brian’s heartless readings of the Bible, then his turns to ‘natural law’ when the Bible fails, don’t hide his bigotry and cruelty,” Mr. Miller wrote in an e-mail. “In the end, that’s what he is. Cruel.”

I spoke with Mr. Brown by phone, and he seemed to agree that the setting had made little difference. “There’s this myth that folks like me, we don’t know any gay people, and if we just met them, we would change our views,” he said. “But the notion that if you have us into your house, that all that faith and reason that we have on our side, we will chuck it out and change our views — that’s not the real world.”

As for Mr. Savage, he felt that being on his home turf had actually worked against him. “Playing host put me in this position of treating Brian Brown like a guest,” he said. “It was better in theory than in practice — it put me at a disadvantage during the debate, as the undertow of playing host resulted in my being more solicitous and considerate than I should’ve been. If I had it to do over again, I think I’d go with a hall.”

Oppenheimer ends the article on a positive note, though, mentioning that former anti-gay activist David Blankenhorn changed his mind after sitting down with same-sex parents. "Perhaps all is not lost," he writes.