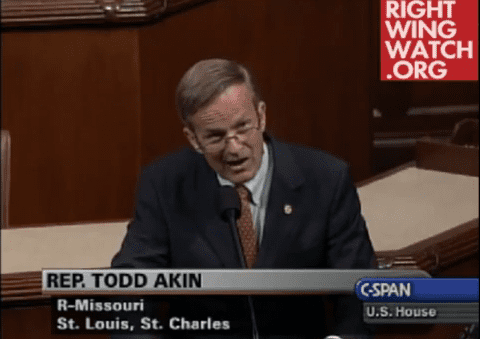 This was mentioned in passing earlier this month, but this video is worth another look. In 2006, long before he was known for fabricating something called "legitimate rape", zealot Republican Congressman Todd Akin of Missouri took to the House floor to decry same-sex love's destructive properties.

"Anybody who knows something about the human race knows that there is no civilization which has condoned homosexual marriage widely and openly that has long survived," he said at the time.

But if Akin is to be believed, and we're meant also to believe in "American exceptionalism," a characteristic the GOP regularly celebrates, wouldn't the States be the exception to this spurious rule? It's all very confusing.

Meanwhile, in other Akin news, President Obama poked some fun at the congressman during a fundraiser in New York City last night. "Recently some of you have been paying attention to the commentary about the senator from Missouri, Mr. Akin," said the president, before the continuing, "the interesting thing here is that this, this is an individual who sits on the House Committee on Science and Technology but somehow missed science class."

Watch video of Akin's anti-equality argument AFTER THE JUMP.