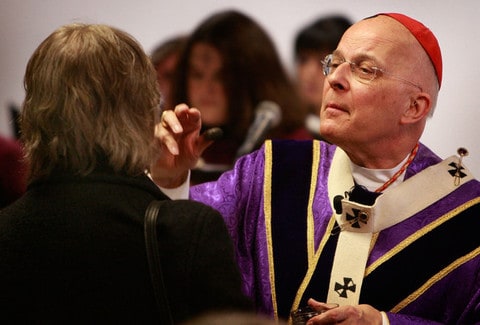 Marriage "comes to us from God," rather than the government, he said, before using his Biblical perspective to lay out a discriminatory definition of the marital union: "Marriage is what it is, what Jesus said from the beginning: Two in one flesh, for which man leaves his family and joins himself to his wife; and wife leaves her family, and joins herself to her husband."

George went on to claim that equality-minded political leaders like Gov. Pat Quinn should be finding methods other than marriage to recognize same-sex relationships, the local CBS News affiliate reports:

There must surely be ways in our civil society, where we can honor friendships, where we can respect other people, without destroying the nature of marriage. It is very important, for your whole lives, give witness to what marriage truly means. And while civil laws might change –– if they do — then society will be the worse for it.

And surely some of the people celebrating their anniversaries with George yesterday were worse off for his speech.