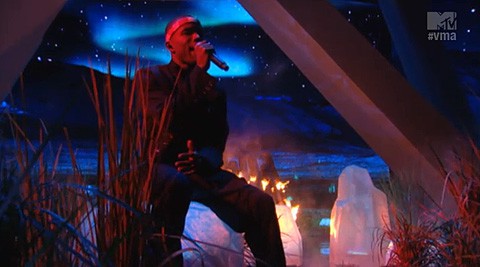 In the midst of targeting several celebrities in the audience, host Kevin Hart gave Frank Ocean props last night in his opening monologue for having the courage to come out of the closet:

"I think what Frank Ocean did was really great, and I'm very serious about that. For those who don't know what Frank Ocean did, he realized he needed to come out of the closet in the middle of singing one of his songs. 'I've been thinkining about you, Leroy.' They said, 'Frank, I think you said "Leroy,"' he said, 'No I didn't. I said "Lisa."'… They said, 'Frank, we can play it back if you want us to.' He said, everybody take five, he wrote a letter to his fans. Not everybody can do that, and for that, I commend you."

The audience agreed. Later Ocean sang a gorgeous rendition of "Thinkin About You".